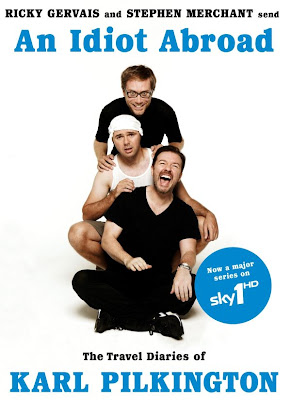 I found a series of videos on Youtube produced by comedian Ricky Gervais, where he sends his friend, and possible moron, Karl Pilkington around the world to see if travel really can broaden the mind. I find it a little bit funny, but I'm not sure why. Karl is not an idiot. He is actually way better than many travellers and tourists I have seen. He does make a few funny remarks on the strange things he sees. Ricky really puts Karl through the mill, experiencing all the "native" stuff like eating cockroaches, and getting massaged by flaming gloves. It only proves that all humans have their limits as to what they can tolerate. What is normal in one society can seem disgusting, gross, cruel, evil or whatever in another society. Once you learn that lesson, move on. It is not really necessary to make yourself sick eating scorpions just to get a laugh from your home TV audience.

Pt 1 of wall of china
http://www.youtube.com/watch?v=R4ZyNGLFMP0

Karl meets Jesus Christ in Jerusalem. Jesus rides a motorbike somewhat disguised as a donkey. I don't know why this was in "deleted scenes" except maybe pressure from religious extremists to keep it off the air.
http://www.youtube.com/watch?v=hhrgwUNpVQk

Yes there is an expression "travel broadens the mind". But as far as I'm concerned, you do not broaden the mind by plunging yourself into a completely foreign culture. In many cases that would simply be too much, it messes your head up, as Karl rightly remarks. If there is something about a foreign culture that you find appealing, that's great. If you think it's sickening, or repulsive, well don't do it. You probably need to be raised from birth in a given society to appreciate many things.

Yes it may be broadminded to try some of the food, or accommodations. But more realistically, you should be able to at least talk to people from other cultures. Many of them speak your language even if you do not speak theirs. That is where I think travel is most likely to broaden the mind, not in doing things that make you throw up. That's just for the benefit of TV audiences, and I don't think it does anything to broaden their minds either.

At one point, Karl is watching a Chinese woman devouring several scorpions for a snack. She is eyeing the rest of her scorpions hungrily as she gobbles down the first. Karl is obviously disgusted, and would never be able to enjoy eating those scorpions. But it takes a lifetime of living in that environment to develop the love for eating scorpions, Karl obviously will never achieve that. He may eat one, but because of his culture, he will likely throw up. But is there anything we do that Chinese people may look at with equal disgust? What sickening stuff do we eat? I don't know. But I do know I have a 10 year old grandson who hates almost any food as if it was live scorpions. Over the years he has had virtual barfing fits over cherries, pizza, any kind of vegetable or fruit, bread crusts, and almost all meats. When I take him out for lunch he only wants caffeine and sugar, so Tim Hortons is obviously the place to go. Apparently those are the only things that are universally loved and need no cultural acclimatization.

I think no traveller is successful in broadening their mind until they begin to question all the chauvinist propaganda that they absorbed in a lifetime at home. Many American love watching "Fox News" and listening to Rush Limbaugh on the radio. I can do that too, but to me it is much like swallowing live cockroaches. I don't even know why I do it. Maybe it is broadening my mind, maybe it is making me more narrow minded in my disgust for right wing propaganda. I suppose I would have to have been raised in a right wing racist southern family to really love that stuff.

Many of my blogs deal with motorcycles, with travel or with breaking down prejudices. I think it is worth while to be able to travel by motorcycle, and not to think, act or talk like an idiot while doing it. How does a traveller go about not being an idiot? Well it starts with clearing your mind of a lot garbage. You should at least know that just because people speak a different language does not mean it is gibberish. Just because they worship a different God does not mean they are going to hell. Just because people are not rich does not mean they are lazy bums who need to get a job.

Picture: This is a book apparently: http://textpublishing.com.au/books-and-authors/book/an-idiot-abroad/
Copyright the Lost Motorcyclist