Countersteering: Why Doesn't it Work at Low Speed? 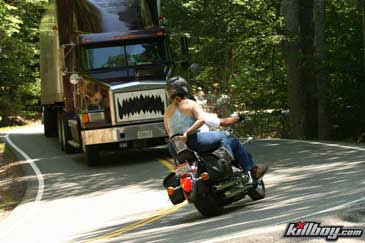 Countersteering is often oversimplified into the expression "Push right to go right, push left to go left". The reason this expression is taught, is to help riders remember which way to push. Actually, countersteering also works by pulling the handlebar, and if you pull the handlebar, it would be "Pull left to go right, pull right to go left." My own feeling is that memorizing phrases like this is actually pretty useless. For one thing, your brain is too slow to steer and balance the bike if it has to process catch phrases, and for another, this is an oversimplification that ultimately prevents understanding of what you are doing.

Once you are told what countersteering is, it is your job to make it a subconscious reflex. Not to be constantly repeating phrases to yourself as you go around curves. I have been countersteering for forty years, and I never think about it any more unless I am doing something unusual. For example, let's say I am holding the right handgrip with my left hand. If and when I do that, I find out that my hand is unconsciously doing the WRONG thing to balance the motorcycle. By the way, this crossing your hands trick is a dangerous practice that I do not recommend trying. There is another time when my unconscious countersteering is bad, and that is when I am in deep gravel. In deep gravel, the front wheel should not be steered too forcefully, you have to be very gentle and balance the bike with your body more than you would on pavement.

Countersteering, once it becomes unconscious, is at work all the time, not just in curves or high speed. It works in a straight line, or in fighting a side wind. It works at low speeds and high speeds.

Next we come to this so-called exception to countersteering that you often hear about. It is said "countersteering does not work under 10 kph." I am suspicious whenever I hear of a law of science that has exceptions. Usually it means the law has not been properly formulated in the first place, and that it needs a rethink.

The fact is that countersteering is not simply a matter of "push right to go right." More correctly, it would be this: A motorcycle (or any two wheeled vehicle) actually must steer to the right to go to the right. But it is only in very sharp corners that you would actually turn the handlebars enough to see them turning. In a high speed gradual curve, you turn the handlebars so little it is almost invisible. But when turning around in your driveway, you need pretty much full steering lock to make the corner. So sharp corners (usually taken at low speed by the way!) need a visible amount of steering to get around. Gradual corners (a 100 kph onramp) only need an almost invisible amount of steering with the handlebars.

OK so now the actual steering is taken care of, let's deal with leaning. Remember at high speeds, the amount you turn the bars is almost invisible, but you need to lean a lot for the centrifugal force. In case you don't know what centrifugal force is, let's just say it's the reason you need to lean the bike over at high speeds, but hardly at all at low speeds (like a U turn in your driveway).

We cannot just steer a two wheeled vehicle around a corner, because we first of all have to make sure it leans into the turn. If we try to steer it WITHOUT leaning it, we will fall down to the OUTSIDE of the curve, due to centrifugal force. So how do we lean it into the curve? There are a couple of ways, one is to lean you body into the curve. This is fine at very low speeds, on lightweight machines (bicycles), but at high speeds, and sharp corners, on a heavy machine, you need help. That help comes from countersteering. With countersteering you can lean the bike over to any angle you wish, almost as fast as you can blink. Of course, the bike must be moving (the faster the better for countersteering), and you must be aware of the phenomenon, and secondly you must train the muscles of your wrist to do it without the aid of mnemonics like "push right to go right"

A motorcyclist is both steering and countersteering all the time. So imagine that the countersteering is overlayed on top of steering. Further, imagine you are in a high speed ring, circling to the right at 100 kph, leaned over at about 30 degrees to combat the centrifugal force, and everything is in perfect balance. But if you accidentally steer to the right more than necessary to get around the ring, the bike will stop leaning over. That is very bad, because now you are not balanced, and if you do not make it lean over again quickly at 30 degrees, it will continue to "fall" to the left. What can you do to bring the forces back into balance? One, you could reduce your speed, because you don't have to lean as much if you are going slower. Two, you could force the bike to lean to the right more by easing off your steering to the right. In other words, undo the mistake you just did when you accidentally steered too much to the right. As you steer less to the right, the bike will gradually lean more to the right, until it is in balance again, and you can resume the normal steering angle.

How can the rider tell when everything is in balance? I think that is almost unconscious also. It is actually just as hard to explain when you are driving in a straight line. How can you tell when the motorcycle is balanced in a straight line? Because it is not falling down. Same thing in a curve, except that you are leaning at 30 degrees to the horizon. But it still feels like you are not falling. I'm not sure I can explain that any better.

Here is my previous blog on countersteering.

Here are a couple of videos, some of the ideas expressed are slightly different to mine, but the laws of physics would be the same.

Picture: That is a Kenworth. Not Peterbilt, not Western Star, not Freightliner. I know that because countersteering is now unconscious, so my conscious brain has time to deal with more important things.
Copyright the Lost Motorcyclist