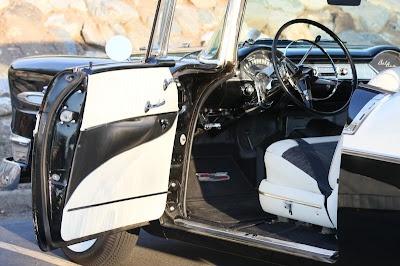 I am going to assume it was just another mass hysteria, (although based on a reasonable question) similar to the "Unintended acceleration", except that apparently "sudden unintended steering" never really caught on with the US media. The main difference is that there is a real mechanical connection between the steering wheel and the front wheels. There was no similar connection between the accelerator pedal and the fuel system. That, and a lack of heart wrenching but gripping stories to drive the general panic.

So now I am just going to make some remarks about "Power Steering" and technological refinements of cars.

My first car was a 1956 Chevy, and one of the many clues to its age is the big 18" diameter steering wheel. Modern cars all have 15" steering wheels. Since the change in size approximately follows the introduction of power steering, there may be some connection. Maybe the big wheel helped make the steering easier? I'm not sure, because there was already a gear reduction in the steering system.

There is only one time that I have felt the effect of a power steering system cut out. I was driving a 1966 Dodge Coronet around a traffic circle when the motor stalled, and the power steering went dead. It's amazing how fast a car can get away from you in a situation like that, as the steering effort goes from very easy to needing both hands and most of your strength. While this was happening, I think I figured out that the power steering had stopped, and what was most scary was gradually applying more and more force to the steering wheel with nothing happening. I'm sure it was no more than 2 seconds before I finally pushed hard enough to move the steering wheel, but it felt like a long time, and I was not sure that it ever was going to turn.

For the first 8 months that I owned the Matrix, I began to gradually notice something unusual about the steering feel. But because it was the first car I had with low profile tires, I did not know whether the strangeness was due to the tires or the car's steering setup. On the freeway, the car did not seem to track straight, it felt like it was darting from one side to the other, and it took quite a bit of force to get it back on centre. Of course, this feel was subtle, and you would only notice it with thousands of kilometers of driving. And I suppose, there was also the inevitable comparison to my departed Honda Civic's light, sports car-ish steering.

It was only when I installed higher profile and narrower snow tires on the Matrix that I noticed the steering feel improve dramatically. So I concluded that the weirdness was with the low profile tires. The original size was 205/55R16, and the winter tires were 195/65R15. So the winter tires were narrower and with a higher sidewall. When the original all season (summer) tires wore out, I considered replacing them with the same size as the winter tires, but I eventually went with the original size, to get the same speed and load rating. Not only that, but there were reports that the original Goodyear RSA tires were crap anyway, and a good tire would have better steering feel. So I bought a set of Michelin Primacy MXV4 tires, which actually felt even better than the winter tires. At this point I started to think the problem was the type of tire, rather than the profile and width. With a bit more investigation, it seems that the Goodyear RSA tires are "performance tires" meaning that they have stiff sidewalls, and make the car ride rough, and also tend to be a little bit unstable in a straight line. So actually, it was a combination of the variable assist steering "feel" and the high performance tires that came with the car. Apparently, the boost and feedback can be finely tuned on a new electric steering system. Some cars with EPS can change steering feel with the push of a button.

Maybe one day we will have power steering in motorcycles. Some snowmobiles are already there.

These days, new technologies sneak up on you. Back in the good old days, if a car maker introduced new technology, they would boast about it in full colour ads and it would be a feature that supposedly made all previous cars obsolete. Not any more. Many new car features either make the car safer or make them more reliable or cheaper to manufacture. And every time a new technology is put into production, some people will find a way to turn that into an accident where they can sue the car maker for millions of dollars. So the less we know about the technology, the better, as far as car makers are concerned.

This story of hidden technology reminds me of a GM car years ago that introduced a temperature gauge for radiator coolant. The needle of the gauge was proportional to temperature of the coolant, and provided some good feedback for the driver. It was a lot better feedback than the "idiot light" it replaced. (an idiot light comes on when the coolant is too hot, otherwise is off). Unfortunately, people can get obsessed with "too much information", and some drivers got worried sick about how slowly the needle rose to normal, (or how quickly), or exactly where the needle pointed at all times. Not only that, but they would compare their observations with owners of identical cars and note that their needle did not point to the exact same spot on the dial as the other car. Which to them was proof that their car needed a whole new engine. There was simply no reasoning with the obsessive owners. Finally the GM dealers got fed up and GM reverted to a gauge that was uncoupled from the coolant temperature. Unless the coolant boiled over, the new gauge was designed to rise from "cold" to "normal" in a uniform amount of time. Then it would remain pointing at Normal. If the coolant boiled over, it would point to "Hot". Pretty much an idiot light disguised as an instrument. The complaints stopped. Obviously, some car drivers could not handle the truth.

Sad to say, but advances in human intelligence have not been keeping pace with advances in technology.

Picture: '56 Chevy's 18" steering wheel. But did it actually help turn the wheels before power steering was common?
Copyright the Lost Motorcyclist