Would You Steal This Helmet? 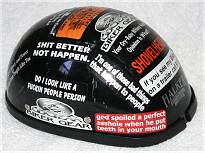 Motorcycles are more vulnerable than cars in several areas, and one of them is when you park a motorcycle and leave something behind. Whenever I go to Port Dover, I usually leave my helmet and jacket on the bike and go into Tim Horton's or walk over to the beach. I have never had anything stolen despite the fact that my saddlebags are leather and not lockable. Yesterday, in Port Dover, I had a conversation with another biker on this very issue. The problem is that most of Port Dover's restaurants do not give you a good view of your bike. (unless you are talking about a hot dog stand) And the person I spoke to was concerned that something would happen to the bike if he went into a restaurant.

At Port Dover, there are usually a lot of bikes parked in the middle of town, and usually lots of bikers standing around talking or whatever. What do you think would happen if somebody grabbed a helmet off a bike and ran away? Honestly I don't know, and I'm not sure it has ever happened. But this is what some low life criminal could be thinking "I better not try it, because I might get beaten up". 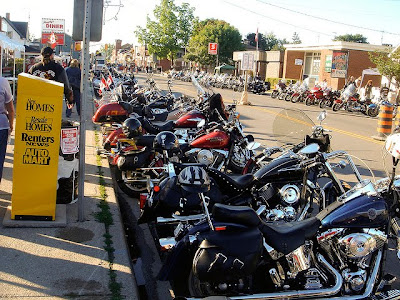 I don't leave my helmet there to test the vigilante justice system, I leave it there because it is very inconvenient to drag it around. I leave it there because nobody has ever ripped it off in all the years I have been going to Port Dover. And when I am feeling less confident (depending on the day, and the parking space and the length of time) I may lock it with a chain, or wear my old helmet that I don't care about (but then it's illegal for me to drive home and get my new helmet). But I never leave my key in the bike when it is out of sight, and I never ever leave my wallet even for a minute.

But what if every time I left my bike another person tried to run off with my helmet. Would you like to live in a country like that? Where you could never put anything down for a minute without someone trying to steal it or vandalize it?

Recently there have been a couple of articles in the National Post about the arrest of David Chen, a shopkeeper in Toronto, who chased and caught a shoplifter, Anthony Bennett, and held him waiting for the police to arrive. The police then arrested the *shopkeeper* (I had to emphasise shopkeeper, because it is so counterintuitive you might have missed it) for forcible confinement and possession of boxcutters.

The National Post loves this kind of story. It suits their conservative agenda to get our attention off big time criminals like Conrad Black. And to accuse liberals of coddling criminals. But in my opinion, conservatives are also criminal coddlers. It's just a question of which type of criminal you want to coddle, a crack head dope dealer, or a suit and tie wearing millionaire.

But then I came across a story in "NOW", a Toronto website I have never heard of before, defending the police who charged the shopkeeper. The opinion was written by Enzo Di Matteo, and even in this apparently liberal website, most commenters think that Enzo is blowing smoke, and the shopkeeper was within his rights.

The fact is, that no matter how much we may deplore vigilante justice, law and order does not, cannot, depend on police alone. Yes, the police are important in maintaining law and order. But so too is the natural instinct of people to defend themselves from criminals.

Picture: Bikes parked in Port Dover, and the top picture is a helmet with some stickers. If you would like to buy a "S**t better not happen" sticker, go here http://www.bikerjewelry.com/stickers.html (I do not endorse this product, and I would not put it on my on helmet, and I'm not even sure it would deter criminals, but who knows for sure?)
Copyright the Lost Motorcyclist