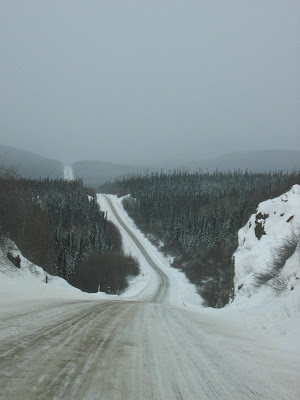 This morning I saw Danny Williams, at the Canada Club in Ottawa, speaking out against Quebec's arrogance on CPAC television. Although I am aware that Newfoundland has been attacking Quebec for many years, this was the first time I think I have heard one of these attacks on television, although it was only CPAC, which I assume almost no one watches.

The current issue is about transmitting power from a new proposed hydro project in Labrador through the existing transmission lines in Quebec. According to Quebec's regulatory commission, the existing power lines do not have the capacity to transmit this much extra electricity (1.5 million homes) without an upgrade. Newfoundland does not mind paying for a modest amount of upgrade, but balks at the cost. So now Danny is going on the offensive, and I mean very offensive.

The geographical location of Labrador is such that it cannot get electricity or roads in or out without going through Quebec. And not just a little bit of Quebec, but nearly a thousand kilometers. Newfoundlanders cannot even build power lines from Labrador directly to Newfoundland. (or let's just say it has not been done yet, I suppose with enough money it could be done going under the sea).

Danny Williams was not complaining about the decision to give this large territory to Newfoundland, of course. Although he did very briefly mention it in his speech, giving the impression he thought this particular part of the deal would not need to be disputed.

There is another deal that he complained about, which is a 65 year contract Newfoundland signed to sell electricity from Labrador to Quebec at a fixed price. The deal was signed about 1976, and today the price is well below market price for electricity. Danny Williams wants this deal, which he says is unfair, to be cancelled and replaced with a deal which gives Newfoundland a fair, current market price for the electricity.

This dispute has gone on for at least twenty years, but Danny Williams delivered this speech yesterday (June 9, 2010) in Ontario. As far as I could tell, it was a one man show, there was no representative from Quebec to give the other side of the coin. And Danny's attack was far ranging, and possibly more damaging than any previous verbal attacks have been. In it I heard these points (I didn't hear the whole speech).

As usual, you do not hear the Quebec side of the story. In fact it's probably better for Quebec to not get involved in the mud-slinging from Danny Williams, who as he says, likes nothing better than a good scrap. The hydro electric deal has been to court several times, and every time it has held up against all legal challenges. After arguments from both sides are made, the essential point always seems to be that according to our legal system, and in our system of commercial contracts, it is valid and enforceable to sign a 65 year contract at a fixed price, regardless of the fact that one party may change their minds at a later date and want out of the contract. Historically, contracts have even been signed for more than 65 years.

From the one course of commercial law that I took many years ago, I believe that there are several ways to get out of a contract. Both parties can agree to terminate it, which means of course that Newfoundland would need to cut some kind of side deal with Quebec, which they have never done. Or it could be proven that one party has not held up their part of the bargain in some way, for example if Quebec had neglected to repair the hundreds of miles of downed transmission lines during the famous ice storm that destroyed large portions of Quebec Hydro's grid. But no court of law has ever ended this Quebec/Newfoundland contract in spite of all the challenges. In fact, with this latest challenge, it's starting to look to me more like legal harassment than a true legal case.

Newfoundland is not even losing money on the contract, they are making about 63 million a year. Considering the fact that Labrador has about 25,000 residents, that works out to about $2400 per person per year. And the contract only has thirty years to go now, before they can charge Quebec whatever they like for the electricity. So it's not exactly "milking Newfoundland dry"

"Newfoundland premiers have long complained that a mid-1960s financing agreement that made development of the Upper Churchill hydroelectric project possible is now transferring billions of dollars of wealth from what once was one of Canada's poorest provinces to Quebec."

Well, another way to frame that statement is "transferring billions of dollars from what was once Quebec, to what is left of Quebec."

And by the way, with offshore oil discoveries, Newfoundland is no longer Canada's poorest province.

Not that I am trying to split hairs, but all through the speech, Danny kept mentioning that this was a "Green Energy" project, but I believe that the USA has not decided that hydroelectric projects such as this, and the similar ones in Quebec are "Green Energy". I don't agree myself, but the greenness is obviously in dispute. Especially when Danny says this is the greatest green energy project on the continent

Picture: taken by me on our 2007 road trip, Driving through Quebec on the way to Labrador. This is pretty typical of our whole day driving. Just to illustrate Labrador is a remote place.
Copyright the Lost Motorcyclist