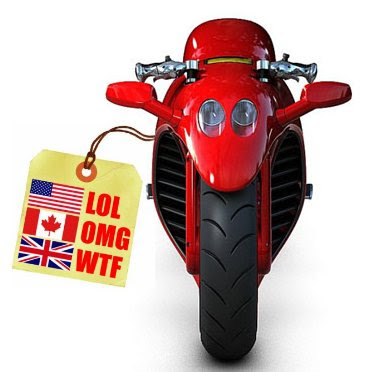 Motorcycles and Cars generally sell for more in Canada than in the USA, even allowing for currency exchange. The argument has always been "You have only one tenth of the customers!" "They have overhead expenses for conforming to Transport Canada requirements." And of course the unspoken understanding "Canadians tend to put up with more bullshit than Americans."

But these days, the Canadian dollar is close to parity with the US dollar, having climbed from 62 US cents to a dollar to about 99 cents. Unfortunately, this has not helped Canadians at all, it has just made the problems worse, as Canadian plants shut down because their export market dries up. And still Canadians see about the same price difference to US prices, despite our dollars 30% increase in value.

I can understand the reluctance of retailers to adjust the Canadian prices downward to reflect the new value of the Canadian dollar. What if the price parity is a temporary thing, and we have to raise the prices again next week? And we bought all those bikes/accessories a year ago when the Canadian dollar was worth 30% less than now. Should we retailers get stuck with that expensive stock?

But the Canadian dollar has been at par with the US for a while now, and looks set to stay there. So sooner or later, Canadian customers are going to demand equal pricing.

BMW has announced the base price of the new K1600GT six cylinder bike at $24,100. The US price has not been announced yet, but rumours are it will be about $23,800. If so, this indicates that price parity may be coming our way. BMW has been very fair in its Canadian pricing, more so than many Japanese companies.

I did a lookup on the prices of other sport-touring bikes. You can see that Honda and Kawasaki have been maintaining quite a wide price discrepancy. I'm sure they would like to close the gap, but with Japanese Yen rising in value, and low profit margins, their only solution would be to raise the US prices. They are afraid of an angry backlash that may cause them to lose too many sales in the USA.

So the free (or cheap) ride for American motorcyclists may still continue for some time, until Japanese makers can start introducing new motorcycle models, and the Canadian dollar has more time to prove it is holding up in value. Or the American dollar is holding down.

Picture: I photoshopped together: