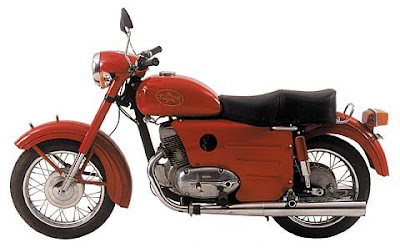 You probably already know that Chinese motorcycles are not the coolest around, what you may not be aware of is that there are some Chinese motorcycles that are so uncool that they don't sell even in China. Apparently that was the fate of the 1985 Xingfu Happiness (pictured left), which had the style of an unpopular 1950 British bike, and was also about 35 years too late.

There would be a good profit for some entrepreneur who discovered a way to combine the coolness of a Harley Davidson Dyna with the low cost of almost any Chinese motorcycle. The best attempt I have seen recently is by "Cleveland Cyclwerks" model called "Tha Misfit". The route chosen by Cleveland Cyclewerks was to use the name Cleveland, to give it some cool. You may think, Cleveland is one of the most uncool cities in the USA. That was true a few years ago, but Cleveland is getting so uncool it is starting to be cool again. Kind of like New Jersey. Cleveland also has the Rock and Roll Hall of Fame, and three or four TV shows named after it, way more than a really cool city like New Orleans. But Cleveland has one big advantage over New Orleans. It is still there.

Here is a Cleveland Tourism video (I hope it's a joke, not sure)
http://www.youtube.com/watch?v=ysmLA5TqbIY

OK Getting back the the bike, as they say in the Cleveland Cyclwerks ads "In Cleveland Trouble Finds YOU". Now apparently the first spot of trouble they ran into is that nobody in Cleveland knows how to make a motorcycle. Although some could make handlebars. So they had the handlebars made in Cleveland, and to fill in the rest of the bike, they hired a motorcycle factory in China .

Names are so important in Motorcycling. Cleveland was a good choice, and "Cyclewerks" adds a bit more coolness. It sounds to me like the name of a German motorcycle factory. Finally, "Tha Misfit" for a model name is a bit rebellious, although it also has certain overtones of long waits for parts.

Anyway, people make fun of all motorcycles, so don't be surprised if there are many jokes made about this one. Unfortunately I don't think it will be imported to Canada.

There is another, older Chinese motorcycle I always thought was kind of cool, the Chinese WW2 BMW sidecar, the Chang Jiang.