Why Does the Birther Movement Not Go Away? 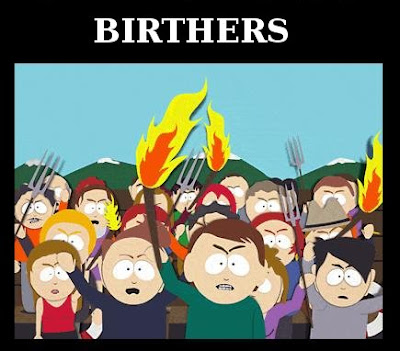 The "Birther" movement in the USA has nothing to do with abortions, although it kind of sounds like it might. No, it is made up of all the Americans who question whether Barack Obama was born in the USA. If he was not born in the USA, then he is not qualified to be president. Recently, Chris Matthews, a self proclaimed liberal journalist, and "enemy of the Birthers" basically joined the Birther movement by asking why Barack Obama had not produced the long form of his birth certificate.

Being Canadian, I am not actually concerned about the fine points of being born in the USA. But I have noted that there is a racist overtone to the entire Birther approach to this problem.

Every comment by a birther in the New York Times article, and in Chris Matthews own comment, has the same fundamental logic: It is not good enough that the US Congress, the electoral college, and the Supreme Court have accepted Barack Obama as the legitimate President. This would of course be good enough if he was white, then everyone would shut up. But because the president is black, we have the equivalent of the old lynch mob gathered around the courthouse howling guilty. Every person in the birther movement has the same attitude. It is not good enough that the existing system of democracy has spoken. Obama is still not qualified in the minds of each one of those birthers. Each and every birther is their own judge, jury and executioner, standing outside the system. Each one requires their own personal proof of his innocence. The Birthers place themselves above authority of the system that was put in place to decide such things once and for all.

It is not enough for a black man to prove his case to the US government, and the Supreme Court. A black man must carry his documents at all times and present them to any white man who may ask for them, whenever they ask. That was the way back in the good old days of slavery, segregation, and apartheid. The birthers are blind to any other system. They simply cannot accept that the existing institutions work for black folks and white folks equally, and there is no going back on the old lynch mob mentality.

In sports, if the ref's final decision is that you're out, then you're out. Everybody agrees to accept the judgment and move on.  It would be stupid to think that every call in a game would be subject to each and every spectator's own final ruling, and that unless every spectator was satisfied, that the game was not legitimate.  And I might add, in sports not all rulings are even right!  Many important games have been settled by a bad call, in my opinion.  But that does not make the sport any less valid.

The Government has decided that Barack Obama is the President. He is not obligated to prove his case to each and every person individually. The case is settled by a well documented process. Everyone is honour bound to accept the outcome of the process.