Monckton Puts Down Enviro-Zomb in the Telegraph 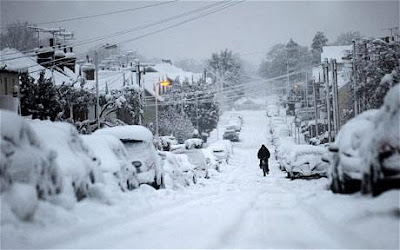 The climate bugaboo is the strangest intellectual aberration of our age
By Viscount Monckton of Brenchley 8:52PM GMT 17 Dec 2010
The Telegraph (UK)

"But don’t you realise," said the bearded, staring enviro-zomb with the regrettable T-shirt, “that global cooling is what we must expect because of global warming?”

"Don’t you realise," I replied, "how silly that sounds? The lowest temperatures ever recorded here in Cancun six days in a row; four extreme winters on the trot in the Northern hemisphere; more people dying in one three-day cold snap in little England in 2002 than Oxfam pretends died of ‘global warming’ worldwide throughout 2010; where’s your perspective, man?"

"Another failure of perspective. One of the two ancient principles of natural justice long recognised in British law is audiatur et altera pars. Hear the other side too. It’s certainly cheaper, and it’s probably right."


Well, thank you for your introduction, Viscount, so allow me to present the other side, so that many thousands of people may read it, like they read your piece in the Telegraph.

First let me start in the fairest way possible: by attacking your motives in this. You say "enviro-zomb with the regrettable T-shirt". Well according to my research you are part owner in a high end shirt boutique, is that right? How many millions have you made from people who upgrading from common T-shirts to expensive high end shirts?

Next, your station in life resulted from a hereditary title, and not necessarily from merit, like the enviro-zomb and me. (apologies if the envir-zomb was Prince Charles) So why should we listen to you? And third, it seems that you are a died-in-the-wool wealthy conservative who hates paying taxes, especially when those taxes are used to save the environment instead of making war. That is why conservatives generally fall into the anti-global warming crowd.

Now that I have sufficiently torn down your "ad hominems" (see I know some Latin too), let me get into your actual argument. First sentence, I can ignore the insulting, and possibly made up "enviro-zomb" slur, and the remarks about beard and t-shirt, and the staring facial expression. Although I have to admire the very combative full court press at the beginning of your "intellectual bugaboos" article.

You quote the supposed environmentalist saying "But don’t you realise, that global cooling is what we must expect because of global warming?”
You might have heard it wrong, as people often do who have a closed mind. The actual statement would have been "Local cooling is what we must expect because of global warming." The correct word is "Local", and can mean areas as big as Europe in this context. This is a result of changes in the patterns of wind currents, and sea currents.
If we assume that global warming also leads to local (not global) cooling, all the people who died in England's cold snap in 2002, can be attributed to Global Warming which has subtly altered the Gulf Stream. That's a different perspective from yours, but has been explained scientific articles, and in "Inconvenient Truth" by Al Gore.
I can cite a counter intuitive example. When we have extreme cold weather, car engines can overheat. That is because the cold can freeze the coolant, which then cannot function to keep the engine temperature down, and the engine overheats. It makes no sense, unless you understand how a car engine works. It has nothing to do with politics, propaganda, religion, or Al Gore's personality. It is the way a system works or does not work.
You are quite right about global warming being the strangest intellectual aberration of our age. The people of position and wealth feel very threatened by climate change, as they do about anything that may interfere with their God-given and privileged way of life. As they always have been while they profit from destroying the environment. And so they put forward propaganda, thinly disguised as scientific arguments, to confuse the common folk. They have lots of money, and use big words to sound important, and they can spread their message far and wide. But they do not themselves understand either science, or justice. That's what makes it a strange intellectual aberration.
Copyright the Lost Motorcyclist