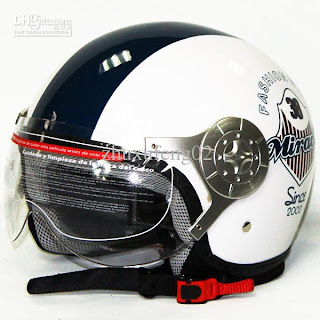 Once again I got talked into buying a helmet.  I was looking for something between my half helmet, and my full face helmet. I should just wear my full face all the time.  But there are some downsides to it.  It is heavy, and too big to fit under the Burgman seat.  It is too expensive to leave strapped to the bike and bulky to carry around.  And now I find that sometimes it makes my nose itch.  When my nose itches, I have to keep lifting the face shield every few minutes to scratch it, and it is a distraction when driving.

I bought a new style of helmet that has become popular in Europe, sometimes called a Scooter helmet, sometimes a flight helmet.  Basically it is a traditional 3/4 helmet, that covers the ears but not the chin.  However, the hard shell covering the ears is shorter than usual, and has a flexible extension.  This way, the helmet can be pushed down to fit under the seat of a scooter, but still has some protection for the ears.

Another characteristic of the scooter helmet is a pivoting face shield, a bit shorter than the normal visor.  It reaches to about nose level, and has a cutout for the nose.  This again helps it store more easily, but allows bugs to hit you in the mouth, unless you have a windshield on the bike.

In Europe these helmets are sometimes called Momo helmets, after the design company that made them popular.  Momo design helmets cost over $300, but there are cheaper versions available from Zeus, CKX, Vega, and a few other manufacturers.  They take some of their styling cues from the Momo helmets, sometimes almost appearing to be a knock-off.

I found a scooter style helmet going for $40 at the Tri-City cycle discount outlet in Cambridge, so I bought it.  It was a CKX and also had a European style ratcheting quick-connect, instead of the traditional D-Rings.  It had an inner drop-down tinted visor as well as the clear external visor, and had the letters DOT on the back.

One thing I am starting to notice is that helmets have gotten bigger since the 1970's.  Back in the old days, helmets were about an inch thick all around.  Now they are more than 2 inches thick.  I guess that gives us greater protection, and today people are accustomed to the look of these huge astronaut-like helmets.  They would look very funny to anyone who was frozen in 1969 and thawed out in the twenty first century.

I found it a bit strange that a medium fit me.  Usually I take large.  But my friend Bob, also trying on the helmets, found that even the large was not big enough for him, and they didn't have the XXL sizes available.  I guess it must have something to do with head shape, something else we never considered important in the seventies.  Apparently there are big differences between round and oval headed people.

I took the helmet for a long test ride, and found that it was comfortable, but was too loud at high speed with the clear visor up.  That problem was easily solved by lowering the clear visor.

In direct sunlight, the clear visor was a bit milky if the sun was on it.  I find that direct sunshine will light up any imperfections, and make it harder to see through.  I cleaned off the visor and put some car wax on it, and that took care of the problem.  I did the same to the tinted visor, but the wax seemed to make it worse.  Anyway, it's not a huge problem, and so I'll let it go.  So far I have found no mention of problems like this on the internet, and I don't really understand how this could happen.

Today I went down to Port Dover on my 1969 Honda CD175.  I wore the scooter helmet with my black leather jacket.  I don't know if the two styles go together, but I'm guessing they do not.  I probably should wear the scooter helmet while riding the Suzuki Burgman, and I should have a hooded brown canvas jacket also.  I'm trying to remember what kind of jackets we wore riding Hondas in the seventies, but all I can remember is riding in short sleeve T-shirts, bell bottom jeans, and helmets with bubble shields.

Picture: Not my own helmet, but a similar style.