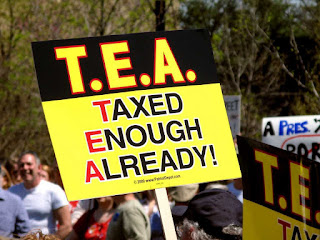 Last night I was watching the Daily Show with Jon Stewart.  Jon Stewart is usually a pro-Obama supporter, although he claims to be neutral.  Last night Jon sided with Fox News against Obama on one (or maybe two) issues.  Mainly, it was the issue of the IRS investigating right wing organizations.  Apparently the Internal Revenue Service in the US is targeting Republican political groups by investigating their tax-exempt status, while letting Democrat (or liberal) groups get through without much scrutiny.

Let's assume there are lots of fraudulent operations in the USA applying for tax exempt status, just for the sake of argument.  Even before this scandal, it would be likely that many of these scams would be targeting gullible right wing fanatics.  That is because gullible right wing fanatics have lots of money, and of course they are gullible.  So the logical thing to do would be to put words like Tea Party, or Patriot in their name.  Just because they are called "Patriot-Tea-Party-something or other",  does not mean these scams are truly right wing politically.  But now that the IRS cannot investigate any new organization that sounds right wing, I think all of these fraud artists will be soon be using right wing sounding names.

The IRS was actually helping the Tea Party by weeding out fraudulent operators preying on their right wing supporters.   But, to be fair, as Newt Gingrich says, the IRS should at least spend equal time investigating organizations applying for tax-exempt status with  "Terrorist" in their names.