I Do Not Know Brian Mulroney, But I Voted For Him 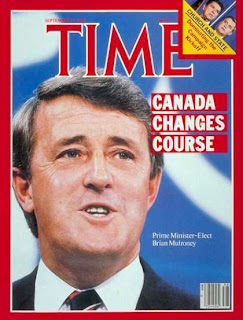 I have said in my blog that I voted Conservative twice, both of those were for Brian Mulroney. (not in the same election, of course)  I used to be a lot more conservative back then, than I appear to be today.  Partly because I have changed a little, but more because of the extremism on the right in the USA, which spills over into Canada.

Although Brian Mulroney was elected democratically twice, by the time his last term was finished, Canadians hated the Progressive Conservative Party of Canada so much that the party no longer exists today. When I took a vacation in Saint Lucia in 1992, Mulroney's reputation had sunk very low.  A local street vendor approached me to buy some coconuts, and somehow it slipped out that I was Canadian.  He offered me his condolences, because we had such a horrible Prime Minister.

St Lucia was not the first time I had problems with Brian Mulroney's reputation.  When I was teaching in Sept-Iles QC, in 1973-75, Brian Mulroney was the CEO of the Iron Ore Company of Canada, and Sept Iles was a one-company town built by IOC.  The teachers on staff knew that both of us were from Baie Comeau, which was located not very far away.  Brian was in the process of shutting down the IOC's biggest iron mine, which did not sit well with the townspeople.  So I got several comments associating me with Brian, which was not true, as I never knew him or even attended the same school with him.  And anyway, he was ten years older than me.

When Brian became Prime Minister, all of a sudden Baie Comeau went from being a quiet unknown backwater town to being a well known town nationally.  Before this, if someone asked where I was from, I could say Baie Comeau, and generally receive blank stares in response.  When  Brian campaigned for prime minister, he made a very big deal being a "boy from Baie Comeau".  So after that successful campaign, whenever it came out where I was from, I was always asked if I knew Brian Mulroney.  And as time went on, and Brian became more and more hated, I felt a greater need to distance myself from him, pointing out that I always lived on Laval St. while Brian lived on Champlain St. The notoriety has died down a lot, but today I occasionally have this same reaction from people who find out where I live.  Canadians apparently have long memories.

Compared to today's conservatives, I think he was a good prime minister.  But there was the GST tax, that I suppose most people still blame him for.  I don't feel the GST was a bad tax, as it replaced a hidden tax. But many Canadians think differently.  On the other hand, he initiated the Acid Rain pact with the USA, that effectively put a stop to the acid rain pollution in the eighties.  Brian also spoke out against South Africa in the international campaign to stop apartheid.  Brian also brought in the Free Trade pact between Canada and the USA, which has given us prosperity even up to today.  Yes, I know Canadians love to complain about how poor we are, but that's because Canadians don't get out much, and half our brains, and all our asses are frozen in winter.  That's the simple excuse for our stupidity.

Long after Brian Mulroney left office, we found out that he had accepted bribes from an aircraft manufacturer to buy their merchandise.

Back when Brian was debating Liberal John Turner in the first election, it was all about appointing political friends to the senate (as it is again today).  During the debate, Brian pointed out all the recent dubious Liberal appointees to the senate (made by the previous leader Trudeau) and asked why John Turner did not cancel them.  Turner Replied that he had no option.