The End for America is Now in Sight 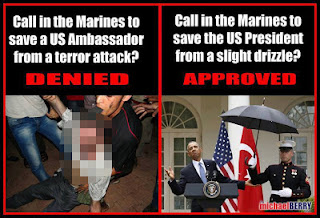 Finally after six years of back-to-back Obama scandals, I realize the right wing people are not nut jobs.  It looks like they were right all along.

A few days ago, there was a joint press conference with the Prime Minister of Turkey and President Obama of the United States.  During the conference, there was a light drizzle of rain. Obama forced two US Marines to hold umbrellas: one over his own head, and the other over the head of the Turkish state.  To me, this was an insignificant act.  The marines were standing around doing nothing anyway.  It's not like they were busy at the time rescuing the U.S. Ambassador in Benghazi.  No no, they were just standing around listening to a bunch of stupid questions being fielded by Obama and the Turkish guy.  They were probably hoping the rain would intensify enough to call off the whole thing.

But I was wrong.  This was not insignificant. What I did not know, was that no US president had ever asked a Marine to hold an umbrella over his head during a press conference - other than Obama.  And it was not the first time for Obama either.  The linked video clearly shows pictures of various Presidents holding their own umbrellas, and other pictures of Obama getting marines to hold his umbrella.

Now for the true insult of this seemingly small act.  If you didn't notice yourself, don't be embarrassed.  It means you are probably not from the Southern U.S. Many Canadians, like me, will miss this too.  Here is the clue: Look at the skin colour of the two men.  The one holding the umbrella is white, the one having the umbrella held over him is black. Therein lies the insult to real Americans (i.e. Southerners).

The true American way to do this, and one that would not have raised a single eyebrow south of Cincinnati and East of Waco Texas, would have been for the white guy to be the President of the USA, and the black guy to be the Marine holding the umbrella.

This umbrella thing was Obama's plan all along.  Health Care was a mere diversion. Killing Osama Bin Laden, a smoke screen.  Boosting the Dow Jones from 7,000 to 15,000 in six years was a red herring.  The hidden plan was to humiliate the white race by making them hold umbrellas for black people, thus destroying the real America.  There is no going back. Real Americans will have to reluctantly, and with heavy hearts, begin gearing up for the second Civil War  (or as real Americans prefer to call it:  "the Second War Between the States" or  "Second War for Southern Independence" or  "Second War of Northern Aggression".) And finally, Al Quaida's plan will be complete: America torn apart just like they destroyed the Soviet Union back in 1990.  All their thanks go to Obama.

An outsiders opinion (from Nigeria) http://www.digitaljournal.com/article/350336