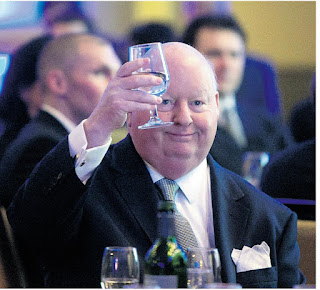 On the CBC last night I watched Power & Politics with Evan Solomon.  They had a panel discussing the Mike Duffy affair.  In this case, Senator Mike Duffy accepted a gift of $90,000 from the Conservative Prime Minister's Chief of Staff.

In the panel discussion, I thought there was a lot of unwarranted support for Mike Duffy. Maybe they were even handed because the CBC is afraid of losing its government funding.  But in my mind, and the mind of 97% of Canadians, this gift was against the law, which clearly says senators cannot accept gifts.

I do not accept the excuses given.

1.  That the gift came out of the personal pocket of the Chief of Staff makes no difference to the law.

2.  A second argument was that the gift was simply to cover the money that Mike Duffy was forced to repay the government from a previous scandal involving expenses.  This is a red herring.

3.  That Mike Duffy is sick, (possibly dying??) and is trying to protect his estate from a huge debt load.  While of course I have some human sympathy on this, it really should not enter the debate, as Evan Solomon mentioned last night.

4. The rules are confusing.

There is a reason why Senators are not allowed to accept gifts, and that is to protect our government from corruption in office.  I know people try to get around this law all the time, but that makes it even more important to protect this principal of our political system.  Why are we even debating it?  Might as well just end this farce of democracy right now, if that's what we really think.  Luckily, most Canadians are not yet stupid enough to let it go.

Mike Duffy has a questionable history, too.  He was once a journalist, who helped the conservatives get elected a few years ago.  He aired a show that made Liberal leader Stephan Dion look foolish, days before the election.  After Dion lost the election, Duffy was awarded the position of Senator by the Conservative leader Stephen Harper (who won the election).

It seems that Mike Duffy's ethics and principles are just as weak as a senator as they were as a journalist. He never really seemed to understand that this political position was not just a reward for underhanded political hacksterism. A senator in the federal government has certain responsibilities, and is actually governed by a code of ethics, even though I suppose many people treat it as a joke in Canada, where senators are not elected.  But Mike Duffy seems to understand very little of the requirements of his post.  And I believe some of the blame goes back to Stephen Harper, who once promised to eliminate the Senate, but now pads it with ignorant sycophants.