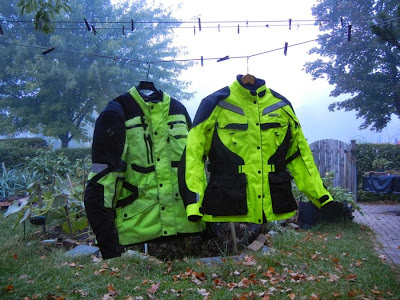 Yesterday, Mary Ann got a new motorcycle jacket in a bright green/yellow high visibility colour.  Her new jacket made the hi-viz colour on   4-year old jacket look washed out by comparison.  Apparently, these colours fade with exposure to sunlight, so if you want the colour to stay bright, you should not leave the jacket draped across the bike in the sunlight while you sit at Tim Hortons eating donuts.  Actually that is only one reason why you should not sit at Tim Hortons eating donuts.

So how do high visibility colours work?  Most colours work by reflecting back light that hits them, but they only reflect back the part of the light spectrum that is needed to create the colour.  For example, if you want orange colour, you make a surface that absorbs the non-orange part of the spectrum.  This is quite inefficient, in that most of the light is just absorbed.  Actually, white is the brightest colour because it reflects back the entire spectrum.  All the other colours give off a much lower level of light energy.

High visibility colours are different from ordinary colours in that they reflect back more light than they receive.  This sounds like it might be defying the laws of physics, but not really.  That's because we only can see a narrow range of colours in our visible spectrum. So the high visibility colours absorb invisible light (like ultra violet), and convert it to a colour that is visible, and then emit that colour.  So hi-viz colours can seem unnaturally bright because they are reflecting visible light by using energy they received invisibly.  Another example of this type of colour is a "black light" shining on a white surface, which you may have seen at a disco party.

High visibility colours are especially effective in low natural light situations like fog, and twilight, where they manage to make the most of the sun's invisible colours.  But they don't work at night very well, as most light is artificial (e.g. car headlights, street lights), and may not contain the necessary invisible rays that we always get from the sun.

Here is an explanation from "Dayglow" a company that specializes in high visibility colours.
http://www.dayglo.com/who-we-are/fluorescent-color-theory/

Are high visibility colours useful on a motorcycle jacket?  Most riders opt for black, and the advantage of black is that road spray, and chain lube don't make it look dirty. Even if black fades, it doesn't look too bad, and black leather can easily be restored to its original blackness. Bright colours (like high visibility) have a tendency to fade, and get dirty easily when used on a motorcycle.  But they do have a beneficial effect, in that car drivers see you more easily.  This is why many safety cones in construction sites have high visibility colours now.  They just don't get knocked down as much.  There is a lesson in this for motorcyclists, who many motorists think of as not much more than a safety cone anyway.

Picture: This morning in fog in our back yard.  Mary Ann's new "Olympia AST" jacket is much brighter than my faded jacket. Now if I can just get her to wear it when she is riding her scooter locally.  It seems to me like she wants to save the bright coloured jacket for Newfoundland next year.  Actually, that may not be a bad idea, as I expect many foggy days on that trip.
Copyright the Lost Motorcyclist