Motorcyclists Do Try to Improve their Image 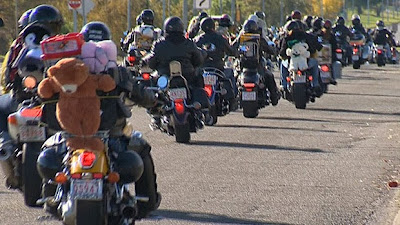 Motorcyclists try to improve their image.  Anyway, most do, but it seems there is a small minority always screwing it up for us.


This is my third blog on the same subject, the Hollywood Stuntz incident, where bikers pulled a man out of his car and beat him up.  This time, my blog is about what got the incident started.

I will start by comparing an authorized motorcycle group ride, such as a toy ride, pictured here.  Charity rides like this have been going on since the eighties to improve the often negative image of motorcyclists. Usually these rides are organized by a club, which invites any other motorcyclists who wish to participate.  A permit is obtained from the police, and a route is decided beforehand.  A large number of motorcyclists usually gather at the start-off point. The police, who have been notified in advance through the permit process, send officers to control traffic.  The ride leaves the parking area, and everyone follows, sometimes two hundred motorcycles may be in attendance.  The police temporarily block traffic at each intersection along the way to allow the procession to pass through without getting mixed up with cars.  It may last 5 minutes before the whole group goes by. Then normal traffic resumes.

At the final destination for the toy ride, each motorcyclist donates a brand new toy to the organizers, and these are then presented to a childrens' charity. Result? Some happy kids at Christmas.

There are sometimes problems on a toy ride.  For example one motorcyclist may crash into another, and somebody may get hurt.  I was on one ride where a police motorcycle officer crashed as he was rushing from one intersection to the next to block traffic.  Some of the public get steamed up waiting five or even ten minutes for the entire procession to pass, although I never heard of anyone getting so mad that physical violence was done.

Here is an article from an Edmonton toy ride with 3,500 participants.  These toy rides and other types of charity rides, have done a lot to improve the image of motorcyclists that were left in tatters by Hells Angels in the fifties and sixties.
http://edmonton.ctvnews.ca/thousands-of-motorcyclists-ride-to-help-city-s-less-fortunate-children-1.977703

Now let's examine the difference with a Hollywood Stuntz parade. In some ways it is the same as toy rides, in that maybe 200 bikers go for a ride in a group.  But there are differences. The Stuntz rides do not have permits, because their only purpose is performing illegal acts on public roads.  It goes without saying, that the purpose of the stuntz rides is NOT to improve the image of motorcyclists.

The lack of a permit for a Stuntz ride is the first problem, and starts a cascade of other problems.  I suppose this could have been worked out in advance with the authorities, but we are probably a long way from the authorities providing police escorts to permit stunt riding on public roads.  In any case, the way it stands today, the stunt riding parades have no police escort. But the need is still there to control non-parade traffic.  In fact it's even more necessary to stop traffic, since the riders will be performing dangerous stunts on the roadway.

I suppose in the minds of the stunt riders, there is not much difference between going on a motorcycle parade with or without a permit.  They appear to be quite excited to take over the job of the police officers stopping traffic.  Unfortunately, it is not that easy. All that the ordinary motorist sees is some hoodlum-looking biker trying to block his progress.  The car or truck driver may eventually realise that this is some kind of "event" with hundreds of motorcycles, that they does not really want to get into.  So most motorists, faced with a situation where their progress is blocked by bikers, will stop and wait it out.

There remains a huge difference between trained, disciplined, uniformed police officers stopping traffic, and mad-max-looking, untrained, and angry bikers stopping traffic.  Sooner or later some car driver is going to get scared at what is going on all around his or her car, and try to run for it.

Unfortunately all this is predictable when an unruly, undisciplined mob of bikers gets together with the sole purpose of having a large parade, without the assistance of the police to control traffic on public roads.

I hope that all the good done by hundreds of well organized charity toy rides is not undone by illegal Stuntz rides which end up with ordinary car riders getting beaten up.