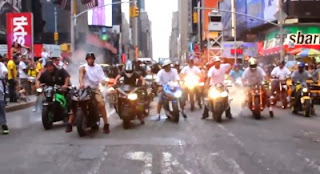 How bad are you when the Hells Angels complain that your motorcycle gang is giving bikers a bad name?

Hollywood Stuntz is a loose gang in New York, who do illegal stunts on motorcycles, on public roads.  They ride in large numbers, seemingly for protection, and to assure a ready made appreciative audience for the stunts.

A video was posted on Youtube, showing this gang assaulting a driver in New York who was driving in an SUV with his wife and child.

The above video was preceded by an American Express commercial, wonder if they know what their commercial are being paired with?

Anyway, opinions are starting to fly about what went on.  As I mentioned, the Hells Angels think this incident is giving motorcycle gangs a bad name.  And they should know something about that, being one of the original motorcycle gangs whose image we are still trying to live down.

The Hollywood Stuntz blog has disappeared (I can't say if it was official or not).  So I had to check a few others for some opinions.

hollywoodstuntz.blogspot.com  (no longer there, but you can use the name if you are quick enough, and you want your blog to have that name.)

I checked one other (Maybe) Texas based military interest blog, where the main opinion was that if New Yorkers simply got used to  driving around with heavy caliber automatic rifles, and sufficient ammunition to take out about a hundred bikers, this would never happen.

And another opinion comes from a white racist blog, Nicholas Stix "The Wild Ones: Racist Brown and Black Motorcycle Gang Hollywood Stuntz Terrorized NYC All Summer"

I don't want to get into a racist dispute, but it seems obvious to me that some people with whitish-toned skin are clearly permitted in the club.  Obviously this leads to counter claims that they either painted themselves white, or they are albino black guys, or they are Puerto Ricans, who may or may not be the "browns" that are referred to.  In any case, after the title the next line refers to the club as "black and brown dominated", making it harder to prove that it is not a racist club, because if blacks/browns are dominating the whites in the club, it would technically still be racist even though they clearly admit whites.  OK That's why I should not have even started into this stupid line of reasoning, it's even less productive than arguing evolution with a Born-Again Christian.  Also, this seems to be a very loose "club" along the lines of "whoever shows up that day is in".  I suspect there is no fixed membership or dues, but of course I could be wrong.  It is also referred to as a "Pop up club".

While I'm at it, I would like to take a shot at the pro-gunners who claim that this proves you can not trust the police to save you and you should simply arm up with the baddest guns you can find before taking your family for a drive.  Obviously, the logical answer is that trying to mow down 100 bikers who themselves may be armed is not going to make this situation any better than calling the cops on your cell phone while you lock your doors (was not done by the SUV driver apparently, watch the video if its still there.)

In summary, I am going to have to side with the Hells Angels for the first time (I think). But not the gun nuts, and not the racists.  This kind of stuff is going to revive the bad name the bikers got during the fifties and has not completely faded to this day.
Copyright the Lost Motorcyclist