Testing My Riding Gear on the Freeway in Rain 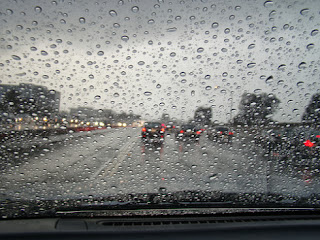 For my second road test of my rain gear, I went on a 150 km loop that included 80 km of freeway.  It was raining moderately all afternoon, the temperature was 6 degrees C, or 43 degrees F.  Humidity was 88%, good to know for testing the anti-fog spray on my face shield.

I started off with ordinary indoor clothes, including jeans and a light sweater.

The outer waterproof layer included my lace-up motorcycle boots, Teknic Tornado waterproof/breathable gloves, my NexGen two-piece rain suit, and a full face helmet with Anti-fog spray on the inside of the face shield.

The two layer approach was only for the pants and jacket.  The socks, helmet and gloves were just one waterproof layer each.  I could have put on a second waterproof layer with boot and glove covers, but chose to leave them off to test my Teknic gloves, Gore-tex socks, and non-waterproof boots all by themselves.  Also, I want to test the Teknic glove's built in rain squeegee, which would be covered if I put the overmitts on.

I managed to get all that gear on without pulling a muscle, and started off down the rain soaked street. The anti−fog spray failed within a few seconds.  To be fair, maybe the anti-fog spray was better than nothing, as the humidity was 88% and the temperature was only 6c.  Anyway, I had to leave the shield cracked open until I got on the freeway.

My next problem came from hitting a puddle at 100 kph, which momentarily made the handlebar feel loose, like I was hydroplaning.  I slowed a little and kept looking for puddles after that.  Blame the fat front tire, and the fact that it will soon be due for replacement.

When you are out riding, the faster you go, the heavier the rain feels.  That's because more drops are hitting you per minute, and the drops are hitting you at a higher speed, too.  One inch of rain when standing still feels like about ten inches when moving at 100 kph.  That's why I think that freeway riding is the best way to test rain gear.

After another 40 minutes of riding, I could feel cold water getting into my leather boots.  The boots were not advertised as waterproof, but I found it interesting that they could last over an hour before they started getting waterlogged.  With my Gore-tex socks over two layers of dry socks, my feet were still warm, however.

As my left fingers were getting very cold and wet, I stopped and put the rain cover mittens over my Teknic gloves, and immediately I could feel my hands getting warmer.  They stayed warm all the way home after that.  But as my hands got warmer, my feet were getting colder.

The hot tip for rain riding is to put the gauntlet under the coat sleeve, but I found it too difficult to do.  With the gauntlet over the sleeves, my hands remained mostly dry until I put the rain covers over them.  This effectively ended the glove test after an hour of riding.

After I got home and removed all my riding gear, I had basically no wet spots on any of my inner clothes. Only my top layer rain suit, the leather boots, and gloves got wet through. Except for the one finger where the Hipora membrane leaked, the gloves were only wet on the outside.

I must remark that my crotch did not get wet. That is one of the worst problems with rain suits.  I am not sure why, but it could have something to do with my Airhawk air seat cushion lifting my rear end above any puddles that may collect on the seat.  I didn't have the time or inclination to try another test without the Air Hawk seat cushion.


Picture: from this web site  http://rahmasari.wordpress.com/  What might be a faceshield in the rain.  The Teknic glove's squeegee really didn't do much for me.  All the fog is on the inside of the face shield, out of reach of the squeegee.  Also some drops are on the inside too.  And then the outside raindrops can easily be blown away my moving my head to the top edge of the windshield on the bike, where the wind blast is most effective.  The squeegee may be more effective if there was fog condensing on the outside of the shield, as sometimes happens when the humidity is 100%.
Copyright the Lost Motorcyclist