Hydro Quebec and the Quiet Revolution 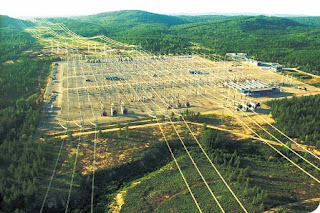 At the start of the sixties, the Quiet Revolution in Quebec began. By the end of the decade, the Liberal government of Quebec had taken on quite a bit more power, at the expense of the Catholic church, and the opposition "Union Nationale" party that had held sway for much of the twentieth century, and even at the expense of the English elite that had controlled the province for 200 years.

A central feature of the Quiet Revolution was Hydro Quebec. Living in Baie Comeau, I got to see close up the first mega construction project undertaken by Hydro Quebec, the Manic 5 dam. Baie Comeau is a seaport situated at the mouth of the Manicouagan river. With a 214 metre high dam, people in town wondered what would happen if it ever broke, but I guess being 200 km upstream it didn't exactly keep us awake at night. All the cement and supplies landed at Baie Comeau and were trucked up to the dam during the construction.

In 1963, Hydro Quebec, a government utility, had completed the takeover of all the remaining electric power companies in Quebec, which had been started in 1944. They also insisted that the language of work in the company be French, a key symbolic move that was the beginning of the end of the English elite in Quebec. Just to explain for people who did not live there, up to that time, the language of work for anything above a foreman was generally English. Engineers, managers, accountants etc. were all English speaking in Quebec, although the majority of the population spoke French. Even in hospitals, the doctors were mostly English speaking and the nurses too. A friend of ours was a nurse in the local hospital, and spoke no French at all, regardless of the fact that most patients were French and many spoke no English. All this was starting to change, with Hydro Quebec in the lead. Because they hired so many engineers, the government could also build Universities and colleges to teach engineering (and other subjects of course) to French speaking students. In 1965 I went to the all-English Bishop's University, but the new Universite de Sherbrooke, right nearby was starting to teach for the first time, engineering courses in French. I can remember some discussions about this at Bishop's where the students found this development went against all common sense. "They don't even have any French engineering textbooks. They're all in English!".

This move that was the first of many which eventually led to most of the English elite of Quebec leaving for Ontario during the late seventies. Apparently about 800,000 people left and they took with them many of the biggest businesses in Quebec, including Sun Life Assurance, and the headquarters of the Bank of Montreal. I was also part of that move, leaving with my family in 1979 for Ontario.

Getting back to the Manic 5 dam, one of the difficult problems with this dam was it's remoteness. Not only was Baie Comeau pretty remote already from population centres, but the dam was even further. All the electricity had to be transmitted somehow to the main grid which at the time, Baie Comeau was not on. Hydro Quebec had already started a project under the direction of Jean-Jacques Archambault, to install a 735 kv transmission line between Montreal and the Manicouagan-Outardes complex. In 1962, many American specialists believed 735 kv unrealistic, as the highest voltage lines at the time were standardized to 315 kv. This voltage had the potential to throw a lightning-like spark through the air about 2 meters to anything that is grounded. As a university science student I took some interest in these unprecedented transmission lines. I remember one day in a University class the topic of those lines came up and I actually knew their voltage rating, which shocked the rest of the class. "Why would anybody want to know that?" Hey, it seemed important to me.

As with any pioneering projects, I guess there were some setbacks. In 1998, many of the towers came down in an unprecedented ice storm and there was a lot of criticism and I-told-you-so's. Tom Adams of the watchdog group Energy Probe in Ontario, a supporter of utility privatization, said the outages in Quebec "are the bitter fruits of an overly centralized system." Columnist Henry Aubin in the English language Montreal Gazette said that Hydro Quebec has enjoyed a long run as the "symbol of our engineering know-how and the flagship of Quebec's economy." But following the ice storm, "Hydro-Quebec will become an ex-icon, humbled, no longer entitled to a widespread assumption that it knows what is best for the people." But as far as I know, changes were made, the towers were rebuilt, and are still transmitting power.

One of the biggest gambles made by Hydro Quebec was on building dams while Ontario was building Nuclear generating plants. At this point in time, it seems like the bet on renewable water power paid off, and now Hydro Quebec is starting a new mega project, the Riviere Romaine dam, just south of Labrador.
Copyright the Lost Motorcyclist