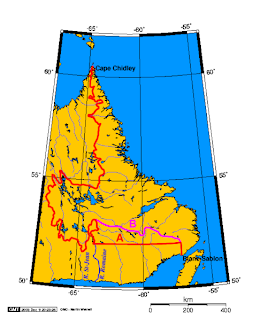 The issue of Quebec and Labrador helps to explain the acrimonious relations between Quebec and Newfoundland. Or maybe I should start by stating that relations between Quebec and Newfoundland have been acrimonious, although recently the boundary dispute has finally been settled. Back in the eighties, there was an attempt at constitutional reform which would have granted Quebec special status in Canada, and it was certainly noted by Quebec that Newfoundland officially nailed the coffin on the accord, when it cancelled its planned vote in the provincial assembly.

The territory of Labrador, at 270,000 km2 is actually larger than the island of Newfoundland, 135,000 km2. But it only has a population of about 27,000 compared to Newfoundland at nearly half a million.

Originally, Labrador was not of much monetary value to anyone, but shortly after Newfoundland joined Canada, huge iron ore deposits were found there, and two railways were built from Quebec into Labrador. Neither railway was connected to the continental grid, and instead went to a seaport to load ore onto ships.

The sticking point was getting the power out to the North American grid. Even the usually impartial Wikipedia covers only the Newfoundland side of the issue "The division of profits from the sale of electricity generated at the plant have proven to be a very sensitive political issue in Newfoundland and Labrador, with many considering the share accorded to Hydro-Québec "an immense and unconscionable windfall."" So of course I will mention that there was another side to the story.

By checking a map, you can see that only way out was through Quebec, and the only technology available was the untested 735 kv power lines that were being constructed to Manic 5. The federal government helped negotiate a deal that gave Hydro Quebec the rights to buy the electricity at a fixed price from Newfoundland. This price was set low, as there was a the expense building the power line, and risk that the line would not work, and a very real threat that energy prices would go down as soon as the (then new) nuclear power plants began to come online. When nuclear power started to unravel, and oil prices unexpectedly started to climb, this long term deal didn't look as good for Newfoundland, and they challenged the contract in court several times with no success. Luckily for them, the deal is going to be ended in about 2040.

Recently Quebec has decided to go ahead with a new power plant and dam on the Romaine river, which is a river that had its watershed cut off by the 1927 agreement. In order to go ahead with the dam, which will of course flood a part of Labrador, Quebec has worked out an agreement with Newfoundland not only about the Romaine river, but about the sale of electricity from a proposed expansion of the Churchill Falls project. So I guess the boundary dispute between Quebec and Labrador is finally over. And as far as I can tell, without any bloodshed.
Copyright the Lost Motorcyclist