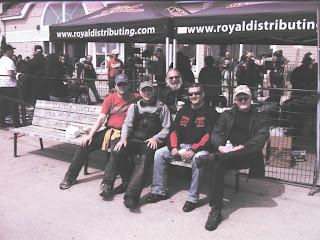 Friday May 13, 2011. My second trip to Port Dover in 2011 fell on a Friday 13th, with perfect weather. Even the threat of rain showers later in the day might have scared some people off and reduced congestion a little.

We assembled a group of five bikes and riders. The only new machine on this trip was a 250 Ninja, and in my opinion it's nice to see the 250 class well represented.

Since I ended up being the ride leader that last few times, I prepared for the trip by looking at Google maps. I decided to use some strategy in order to not get tangled up in the traffic and road blocks. My strategy was to find the least likely way in to Port Dover, and that would be from the south. But because Lake Erie was to the south, I just went as far south as I could before moving in toward Dover in a classic one-sided pincer formation.

Once again we were stopped by a police contingent for a safety check, at the same place as last year. This time they were not checking documents, just horn, brakes, and lights. So we didn't have to get off the bikes. They completed the five checks in about a minute, with one officer per bike. Mine however was the slowest. The rest of the gang thought it was because I was asking the female police officer for her phone number. I should have pretended I did, if only to enhance my legendary status. But actually it was because I couldn't figure out how to turn on the headlights.

Taking a circuitous, yet speedy route, we arrived at the exact same parking lot as last year, locked up the bikes and headed off to get some apple fritters and see the bikes and the bikers. In the crowd, we spotted the naked guy again, although truth be told, he is not really naked. But still a lot more than you really want to see. Also there were some nice looking bikes. One new addition this year was the bikini bike wash. You would think with twenty thousand bikes, somebody would want a bike wash, but apparently not. First, most of the bikes were clean already, and she would only get water spots on the chrome. And the for rest of the bikes (like mine) that were too dirty to care about water spots, well they were parked too far away and inaccessible. How about next year a bikini shoe shine? I could go for that.

One other new thing was seeing some people taking their pictures sitting on the police motorcycles. Looks to me like the Police are really going overboard to try to be nice. Maybe I should have asked for the female police officers number, and a hug too, just for passing the test.

We got our apple fritters and coffee ** and were sitting by the dock when I decided to take a picture of the group. I was ready to take just the other four guys, but Matti suggested I could use the timer function to get myself into the picture. There was a convenient flat bollard right on the edge of the dock for me to perch my camera on. But I was unfamiliar with the timer button. So after a mad dash to pose, the first picture failed. A second attempt also resulted in failure. But then one of the girls from the Royal Distributing booth behind us took pity and came over to snap a few pics for us, with all five members of the group. 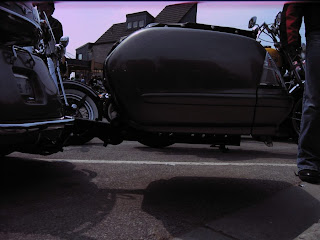 Then, as usual, we got split up going back to the bikes, then miraculously found each other again, and made it home in a group before getting hit with any rain or hail.

Picture 1: Thanks to Royal Distributing girl, finally a successful picture, except I forgot my camera's colour metering chip is screwed up.

Picture 2: I decided that the trailer without wheels deserves a pic. This was NOT photoshopped.

** The link to the Apple fritter website is not a paid advertisement, and I have no commercial connection. It is merely a public service to anyone who likes motorcycles and real apple fritters.
Copyright the Lost Motorcyclist