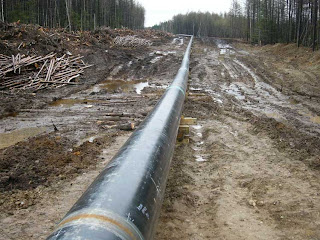 There was a disturbing article in our local paper "The Record" about non-Canadians trying to block a new oil pipeline that the government wants to build.

The article is written by Kathryn Marshall of EthicalOil.org. In it she blasts "foreign" money being used to sway Canadian decision making about oil pipelines.

In her article, she quotes an anonymous environmental radical saying that they would accept money from Mars.

"An organizer from the foreign-backed, anti-pipeline group, Dogwood Initiative, recently declared: “If I got duffel bags of money delivered from Martians from outer space I would still take that money.”"

Obviously, this is a hypothetical situation, but if (some) environmentalists would accept money from Mars, then you would obviously take money from Al Quaida, the Taliban, Socialists sources, and other unCanadian and unwholesome people.

The main tactic of this article is to sidetrack the argument away from "Is this pipeline good for Canada" to "Foreigners are trying to block a pipeline that Canadians obviously want, and need, and a pipeline that would be good for them".

Should I play along with this debating tactic, or should I take the high ground and refuse to get into "where does the money come from" and "who is more Canadian, you or me?".

We have had many debates about the environment in the last 50 years. This pipeline is a sub-debate about global warming, and is also about pollution from oil spills and destruction of habitat. So it is another environment vs. profits debate. In the past, these debates ended up being the little guy (environmentalists) mounting a grass roots opposition to giant, wealthy multinational corporations. In those debates, the government often sided with the corporations in the early stages before public opinion became unstoppable.

So up till now, it was always big corporate money vs. private individuals sending in small donations. If it was just about money, no environmental cause would ever win. But now it seems things have turned around. Now the big money, according to Kathryn, is behind the environmentalists. And if Martians had money, that would also go to the environmentalists.

Now it's time to stop and think. A reality check in other words. If Martians existed, their support would not go to the environmentalists on Earth. And if anybody has a lot of money, it is not environmentalists, it is Exxon Mobil, Shell, BP, Suncor and the like.

"Dogwood Initiative" as a non-profit organization is not listed on the stock exchange. It is based in Victoria B.C., and apparently its most recent campaign was to put stickers on loonies to oppose oil tankers in British Columbia waters. If you want a ballpark estimate of their financial resources, I would think under $100,000. (Or as they say in the oil business 0.01M) That means Exxon alone has about four million times as much money as Dogwood Initiative. (if my guess is right).

It looks to me like not much has changed in the environmental debates. It is still the local people pooling their puny resources against giant mega rich multinational corporations and their puppet governments (like Canada and the US governments for a start Yes Obama that means you.). Now if by chance some money should come to Dogwood Initiative from a "foreign" source like Greenpeace, let's remember that Greenpeace got its start in BC and became a worldwide organization later. And that fundamentally, it is still supported by small contributors around the world.

But even more important is that the global warming debate is a world wide concern, and it is natural that world wide support should be available for decisions that have a world wide impact.

I believe that by framing this debate as a purely Canadian internal matter, Kathryn Marshall is attempting to dismiss the global warming issue entirely.

I looked up the funding for "Ethicaloil.org", Kathryn's organization and found out that it does NOT accept foreign funding. (Greenpeace is specifically mentioned as a foreign source that they (or she) will not accept money from). She does accept donations from "individuals and companies, including those working to produce ethical oil". Kathryn does not list the companies producing "ethical oil" but Exxon and BP would probably be acceptable according to her own definition.

So, to summarize. Despite the conservatives and oil company propaganda to the contrary, the big foreign money is still 99.9% on their side. And no matter what Harper or bloggers like Kathryn say, some Canadians (including me) are still in favour of limiting corporate damage to planet Earth. Now let's get back to a sensible debate about things that matter before I start asking questions like "Is Kathryn a Canadian?".

Picture: Some random pipeline I got off the internet, I think our new pipeline is still on the drawing board.