Scooter Maintenance without the Zen 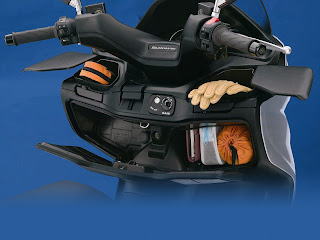 This is a story of "The Lost Motorcyclist" repairing Mary Ann's 2005 Suzuki Burgman 400 scooter.

I took the Burgman out for a ride and noticed the big glove box didn't close any more. The striker (a loop of steel that the lid latches on to), was loose and simply retracted when the box lid was pushed closed. The striker has to be solidly mounted for the latch to work. I continued my ride holding the glove box door up with my knee, but obviously Mary Ann will not be too happy with that arrangement.

Today I removed the panel just over the box lid, called the "Front Panel". It also is removed when checking the coolant level, and so I tried to not get distracted by the fact that I didn't see any coolant in the overflow tank. To get this front panel off, there is a single screw clip inside the glove box, which you need to screw out a little bit, then pull out the plastic clip assembly that it is screwed into. (One of the typical wacky fasteners on the Burgman's plastic bodywork.) Luckily I didn't lose it when it flew out of my hand, because its $1.83 for clip (black) 09409-06322-5PK - according to online parts manual under meter panel http://www.suzukipartsnation.com

With this panel off, I was able to see what was wrong: the striker is screwed into a plastic post molded into the "Front Box". The plastic post had snapped off. Naturally, the "front Box" is one of the largest and most expensive plastic parts of the Burgman.

The latch mechanism on the box lid was sticky. The way it normally works is that by simply pushing the lid closed, the latch will retract when it hits the striker, and then clicks back into place to hold the lid closed. On this bike the latch does not retract easily, and the last time I was slamming the door shut, the force probably broke the striker bracket.

I removed the latch from the door, disassembled and lubricated it. The latch slides, and unless it is slathered with grease, it sticks. It was tricky to put back together, and one little steel ball didn't make it. But the latch still seems to work as well as it did before I took it apart.

Then, under the "front panel" I found a way to unscrew the broken bracket from the striker, and I found a much longer screw and drilled a hole completely through the base. I inserted the new longer screw and tightened it up and it seemed to hold the big plastic fairing, broken plastic stud, and striker together.

I bent and sawed up some plastic bits while getting all the Tupperware back together. (Tupperware is a motorcyclist term for plastic bodywork on motorcycles or scooters.) Finally I closed the lid, and still, the only way it would close was if I held the latch open until the lid was in place. I informed Mary Ann that the latch was fixed, but that she must remember to hold the latch while closing the lid. She answered "I'll never remember that." So as a compromise, when the lid does not close, I asked her to call me before trying to slam it harder.
Copyright the Lost Motorcyclist