Cable Guardrails are Deadly to Motorcyclists 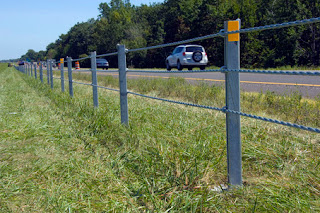 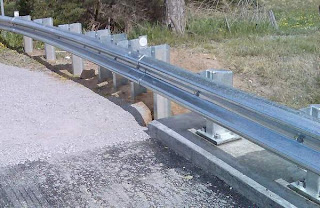 There is one issue about motorcycle safety that I feel strongly about, but I will try to remain objective.  The subject is cable guard rails beside roads.

Cable guard rails are a cheap and effective way to keep cars from going too far off the road, and save in towing bills.  They are made of vertical posts joined by wire cables.  We have miles of this type of guardrail in Ontario.  Another kind is called the armco barrier, using solid metal instead of cables.

For cars, both are about as safe, although the cable type is cheaper. For motorcyclists, armco is safer than cable.

It also seems many so-called traffic experts deny that there is any difference between armco and cable, but I say they are wrong.  And they probably don't ride motorcycles, but I would bet that many motorcyclists do not understand the dangers either.  So I will explain how motorcyclists are more likely to die in low speed encounters with cable guardrails as a public service announcement

A crash between a motorcycle and a guard rail is usually at a small angle.  So in most cases we are dealing with a slide along the guardrail rather than a direct 90 degree perpendicular impact.  The armco guardrail is generally smooth, unless you hit the first post.  There are also problems if you slide along the top of the guardrail, as you may impact the reinforcing posts hidden behind the rail, or if you slide under, where you are more likely to strike a post if you are travelling along in the same direction as the guardrail.

A motorcyclist sliding along a cable guardrail is in a lot more trouble. In many cases I have seen the cables spaced wide enough to allow a helmet to just fit between them.  There is almost no chance of missing the posts, as the cables act as a guide, railroading you directly into the next post. It is especially dangerous if you are sliding along with your head between the cables, or your neck on the cable, as you head will take the full impact when you reach the post.  Even with a government approved helmet, this direct impact with the post at any speed over 20 mph will result in death.

I don't want to be too morbid about this, but why legislate motorcyclists to use helmets then put up guard rails that seemed designed to defeat the helmets in practice.