Can We Agree the Earth is Old 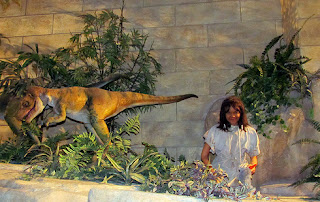 There is an argument about the age of the earth.  On one side you have many scientists claiming it is millions of years old, based on observations of the world around us, and you have some religious fundamentalists who claim it is less than 10,000 years old, based on reading the Bible.

In the USA, people are split on the age of the Earth. Also the question of the age of the Earth is connected to the issue of evolution (as proposed by Darwin).  I thought that almost half Americans believe the Earth to be 6,000 years old, and also believe Evolution is a hoax. There may be other ways to interpret poll data, but even if only 10% of Americans believe in the young Earth, it's still a very high number for a modern secular state.

This summer, while travelling in Montana I came across a large, new, and I assume well funded, museum that claimed to prove the Earth was not old and there was no Evolution.  There are 16 such museums in the US, and a few in Canada too.

In a recent development, Pat Robertson, a well known TV evangelist, has said on his TV program that the Earth may be much older than 10,000 years.  A video of Pat making his statement is here (starting at 1:21).

Pat Robertson, in his TV show, apparently also calls for an end to this fight between science and fundamentalist religion. I feel kind of strange about it, but just this once I think that Pat Robertson and I agree on something.  Unfortunately, people are already starting to defend their beliefs against Pat Robertson's call for reconciliation.

On the other hand, some other people that I usually don't agree with are defending Pat Roberston's stance.  Here is Michael Savage's take on it.

The next link is a website that tries to reconcile religion and science, and I think does a convincing job without ridiculing either side.  Ihe website takes a second look at the Bible, to see if it really does say the Earth is less than 10,000 years old (which apparently it does not). Then Godandscience.org  re-examines the work done by James Ussher, Bishop in the Church of Ireland, about 200 years before Darwin's theory of Evolution was first proposed.  They find several flaws in Ussher's reasoning.

I have been trying to make the same point for a couple of years now, and so I consider it a step forward that an influential public figure has come out with the statement that people are not going to hell for believing the Earth is millions of years old.

So now I have my answer to the question "When God created the Earth, did He create the icecap in Greenland?"  Because if you drill through that icecap, you can find layers of ice much older than 10,000 years.   Seems kind of mean to send people to hell for believing the Earth is older than the bottom layer of ice in the Greenland glacier.

Scientific advances are made in little steps that usually take a lot of background preparation.  The theory of evolution is an example of one of those steps. Now, about 150 years later, Pat Robertson publicly rejects Bishop Ussher's theory on the age of the Earth.  I guess Pat has had quite a few years to think about this question.  After all, we know of his involvement with diamond mining, which I assume would mean contact with scientifically trained geologists, and most of them believe that diamonds were not made in less than 10,000 years.

I hope that before long, we can get a little more movement in this direction.  Then the young Earth theory can join the flat Earth theory, and the Fixed-Earth-at-the-centre-of-the-Universe theory that we no longer have to teach in public schools.

Picture: I think this is in a Young Earth Creationist "museum".  From this website
http://www.policymic.com/articles/9604/creationism-uses-dinosaurs-to-lure-kids-into-radical-ideas-but-scientists-should-not-care-too-much
Copyright the Lost Motorcyclist