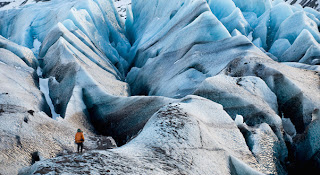 I watched the movie "Chasing Ice" last night, and a few days ago, I also saw a 1960 movie by George Pal, "The Time Machine". The first similarity that struck me was the use of time lapse photography in both movies.  In case you have never seen this classic movie, The Time Machine, maybe you want to skip this review that includes spoilers.  Now go and see the movie, or maybe read the book.

The Time Machine is based on an H.G. Wells science fiction book from 1895, where someone invents a time machine and travels forward 800,000 years to the future to see how the world has progressed. The time lapse photography is used to simulate the effect of moving forward rapidly through time to the future.

Chasing Ice is a documentary by James Balog about our world's beautiful but disappearing ice landscapes.  In this documentary, time lapse photography is used to speed up the shrinking of glaciers so that you can see in one minute, what took five years to occur naturally. 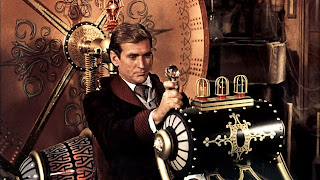 In a way, both movies are about the same thing.   They are predicting the future, and have something to say about humans causing this future.  The main difference is that "The Time Machine" has to go forward 800,000 years to see what will happen, while Chasing Ice only needs to go from 5 years ago to the present time, to see what will happen.  Chasing Ice needs no time machine, nor does it need to  invent a future. It is enough to show what has happened in the last five years, and from there, scientists have told us what will happen next.

In The Time Machine, no global warming seems to be happening.  H. G. Wells is more worried about what will happen to mankind, if the gap between the rich and poor increases, and if we continue having wars with technologically advanced weapons.  According to his vision, 800,000 years in the future, the rich classes (called the Eloi) will have lost their energy and will to succeed, while the working classes (called the Morlocks) have moved underground, and evolved into a different species that now uses the Eloi as feeding stock.  H.G. Wells explains this in terms of evolution and predictable outcomes of social and economic forces.  However he does seem to be discouraged that the Eloi have no will to resist the Morlocks, nor any desire to even rescue each other when danger looms.  The Eloi seem like brainwashed zombies sleepwalking to their doom, not curious about what is happening or why.  The Morlocks, while looking like beasts, at least have drive, cunning, and curiosity.

Now here is where another parallel appears.  If you believe the rapid warming of the planet may have disastrous consequences, then we are already in some ways like the Eloi.  Because humans taken as a whole, do not seem to have the will or even the curiosity to fight back.  Mankind has the same attitude as the Eloi in that we simply accept what will happen.  Another similarity is that our present situation is being controlled and manipulated by present day Morlocks.  I don't mean that they look scary or anything, but there seems to be a split between rich and poor that is growing.  I'm going to call the Morlocks the rich, who benefit materially from a passive working middle class.  I don't mean to imply that the present day Morlocks are eating the present day Eloi.  They are just using them to get richer and more powerful.  And cynically manipulating them through controlled messages on TV, Internet, newspapers, and radio.

H.G. Wells' original Morlocks actually evolved from the poor and working classes, while the Eloi evolved from the rich idle classes.  I'm not sure this is made abundantly clear in the movie, but I read the book after I saw the movie.  The book is far more left wing in it's attitude than a movie (which was made during the cold war) could ever be, and Wells' opinions are made clearer in the book.

My interpretation of Chasing Ice in 2012 has the Morlocks and Eloi in role reversal,  but I think the main point is that in both movies mankind is passively accepting a situation that is within their grasp to change.  And in both movies there exists a class divide that pits an aggressive class against a passive class.