Are You Smarter Than a Fox Newscaster? 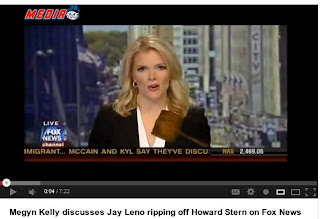 I will confess that I don't very much like Howard Stern.  Howard accuses late-night comedian Jay Leno of stealing his ideas, but let's look at the ones mentioned in the Fox News session with host Megyn Kelly.  Megyn puts on two "experts" who hate Jay Leno to discuss the case. But none that like him, that is not fair.  But then I guess that Fox's motto "Fair and Balanced" is beyond a joke, it is mocking the entire concept of fairness.  Not too surprising, the verdict is that Leno is a swine, but that unfortunately Howard does not have a good legal case due to technicalities.

In the above Fox News clip, Jay is accused of taking these ideas from Howard Stern:  The Jaywalking bit, the Chicken predicting NFL games, "Are you smarter than a fifth grader", and the "Earn your plugs" idea.  Furthermore, Jay Leno hired one of Howard Stern's characters "Stuttering John" away from him.

I'm going to just go over the basics here of copyright, one is that you need to actually copyright an idea to protect it, which Howard didn't do.  Second, you have to actually come up with the idea first, which Howard also failed to prove (as far as I know, and this may be linked to point one, failing to get copyright).  Third, the idea must be implemented, or executed in the same way, which I don't think is true either.

I should explain that there is a big difference between Jay Leno's type of humour and Howard Stern's.  Jay Leno generally takes the high road, and when I watch his show I don't get the idea Jay is mocking and humiliating people for laughs (although some might see it like that).  On the other hand, Howard Stern's stock in trade is shame and degradation.  I don't happen to like that type of humour, so I might as well make that clear again.  For one relevant example, take "Stuttering John".  Stuttering John was basically a punching bag hired by Howard Stern.  He was ridiculed, first for stuttering (hence the nickname), but eventually also for the way he farted, burped, and smelled.  Also how he took dumps, and how he urinated. You can catch a sample from Howard Stern's show here.

Stern's original idea for Stuttering John was to get a stutterer to ask embarrassing questions of celebrities, who would be too polite to snub a stutterer.  Later, Stuttering John was driven off the Stern show by nasty comments from Howard.  To some people, Stuttering John  was funny, and Jay Leno had reportedly planned to use John the same way as Howard Stern did, but in a less abrasive way.  In all the time I watched the Jay Leno show with John Melendez, he was never referred to as "Stuttering John" (by anyone) and I never knew he stuttered until I saw some bits on Howard Stern.  That helps illustrate the difference between Jay Leno's brand of humour and Howard Stern's.

The hiring of John Melendez was the beginning of the feud between Howard Stern and Jay Leno, and honestly I have never heard Jay Leno criticise Howard Stern, but Howard has been lambasting Jay heavily since then.  That again shows the difference between the two,  Howard is well known for hateful comments, Jay rarely says anything bad about anyone.

Now let's look at Jaywalking.  In this bit, Jay walks down the streets of Los Angeles and interviews ordinary Americans, or tourists.  He asks questions about sports, geography, current events.  This does not really sound like something Howard Stern might have invented, and indeed Howard Stern's bit was all about asking homeless people simple questions and betting on the result. The idea of interviewing people on the street is not original, but Jay's idea is not about making fun of the homeless, but about making fun of the mass culture in America, that places such a low value on education.  In one segment, Jay interviews someone who was claiming that he "staged" the dumb answers in "Jaywalking", so to prove her wrong, he simply asked her a few questions, and amazingly enough, her answers seemed to prove Jay's point.

To me there is a huge difference between the tone of Jay's humour, and Howard Stern's.  And honestly, is there any original funny bit that cannot be traced to some earlier idea?  Although I never saw Jay do the chicken bit, animals predicting the future is not all that original.  It's really what you make of it.

Jay does a weekly bit called "Headlines" that I think is funny, he reads newspaper headlines with mistakes or double meanings.  But that bit is only funny because of what Jay does and says while reading them.  Without Jay's personality, the headlines are not funny at all.  (I tried watching the bit once with the sound turned off.  I did not laugh.)

"Are You Smarter than a Fifth Grader", as far as I know, was never used by Jay Leno.  It was taken and made famous by Jeff Foxworthy, on the FOX TV network.  So if anybody stole it, it was FOX.  Megyn Kelly, an employee of Fox, accuses Jay of ripping off "Smarter than a Fifth Grader" at 0:50 in the first video. And just when I thought Fox News could go no lower. Who watches Fox News?  I think we all know - it's the people interviewed in "Jaywalking".

In one final clip, here is Megyn Kelly, on the Howard Stern Show, talking about breasts and penises.  Just to show once again the difference again in the target audience, subject matter and type of humour.  I think Megyn, and probably most of the other Fox News People, "get" Howard Stern's humour better than she gets Jay Leno.