What is Society Fail, Really 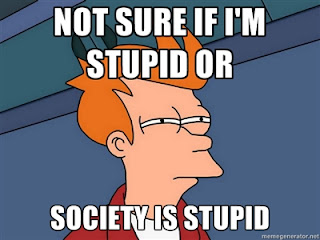 About 15 year ago, while at a party that involved some alcohol, I made a comment to a group of acquaintances, that it seemed like there was an increase in the level of stupidity in the U.S.A., and possibly Canada too.  Someone responded that I had no proof of that, and that often people mistake stupidity for opposition to their own ideas.  Which I would have to admit was true, at least as a general statement.

But in the years since then, I have not been able to shake the idea that stupidity is on the rise.  So it's time to come up with some identifiable characteristics of a stupid society.  First let me distinguish between a stupid society and stupid people. A stupid society means that the society as a whole does stupid things, not necessarily the people within the society being more stupid.  Maybe I should substitute the word "ignorance" for "stupidity".  I hope that does not change the basic argument, because I was not trying to get into an argument about the meaning of these words, What I meant was that society was becoming more stupid or ignorant, making wrong decisions when knowledge and logic could have helped make a correct decision to benefit almost all.

Here are the top ten ways I think you can spot a society that is stupid.

1. Low literacy rates.  I feel like the less that people can read, the more stupid a society becomes.  Or, Increasing numbers of school dropouts.

4. The rise of charlatans, who make fortunes in tricking gullible people into believing their false stories.

5. Intolerance, xenophobia, and racism.  Religious freedom does not exist, or is threatened.

6. Political ideology becoming more like group-think than a real vision for the future.

7. Important national decisions based more on religion or political loyalty, than on evidence. e.g. starting wars vs. protecting the environment.

9. Concentration of all wealth in the hands of a few. Everyone  is out for themselves, including both the haves and have-nots. Greed is a higher motivating force than the common good.  Also, quick profits being more alluring than a sustainable future.

10 Breakdown of the rule of law, where more and more exceptions are made to allow torture, invasion of privacy, racial profiling.  Probably more people being jailed, more crimes committed also.  Some people being exempt from the law. People taking the law into their own hands.  State-sponsored assassinations.

By most of these measures, you could rate a medieval kingdoms as ignorant and stupid.  But to be fair, it takes a long time to acquire wisdom about how to govern a country fairly.  But it is "society fail" to have a country with a tradition of democracy and universal education, and to let that slip away to superstition and brutality.

Some quotes as to what makes a good non-stupid society


Above Picture of Fry (In the Futurama TV show, a man who is transported 1000 years into the future) from 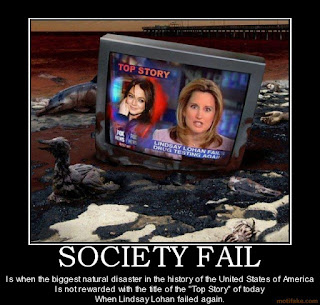