A Day in Toronto 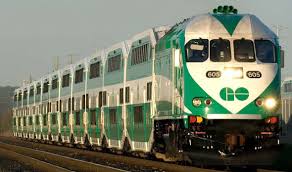 Our nephew, Andrew Moir, had a film he made called "Just as I Remember" showing at the "Hot Docs" film festival in Toronto.  Hot Docs is a festival for documentary films, and although it is smaller than the Toronto International Film Festival (or TIFF), it is still quite a big deal by our standards, showing about 250 documentary films.  A link to the IMDB synopsis of Andrew's film is here:

Since December 2011, there has been a commuter train, called the GO train, that runs from Kitchener to Toronto.  We both like rail travel, even though we rarely travel that way in North America. So we decided to try it out.  There are only two trains a day from Kitchener running into Toronto, the last one being 7:07 AM.  Convenient for commuters, not so good for tourists going to a 4:00 PM movie, but .. oh well.  At least we can walk to the train station from our house.  And the train is a double decker, so I imagined the view from the top would be pretty good.  Actually, the upper deck is not really that high, as the lower deck is near the ground.  Also, the tracks do not often run at ground level, so I never got much of a feeling of being up high except when we were next to the station.  But it was fun seeing the back yards of all these houses and businesses on the way in to Toronto.

Paying for the train was a learning experience.  As it is a commuter train, apparently they do not have a person selling tickets at the train station. (machines are no good, because we need to ask dumb questions)  So a few days earlier, we went to the Kitchener bus station, where we ended up buying a "Presto Card" pass.  This card is loaded with a certain amount of money, and each time you make a trip, you touch the card to a reader to get on, and then touch it again to get off.  If you forget to touch it getting on, you can be fined, if they catch you.  If you forget to touch getting off, your card will continue to pay for the train that you are no longer on, until the card is worthless.  OK, a little bit scary, but we can handle it.  We loaded up our two cards with exactly the amount of money for a return trip to Toronto.  When we got to the train station, we found out, by watching other people, where the Presto card tapping post was (not on the train, but on the platform!). Then we walked to the place where the front car would be, thinking we would get a good view.  This was a long walk, because the train has ten double decker cars, but because it also has two separate locomotive engines, we could not see to the front, and we couldn't even give the driver advice.

The complications continue.  We needed to return abut 9 PM, but the last train would have already left.  But GO Busses keep running, so the last bus back to Kitchener would be around 11 PM, although we would need a transfer at Mississauga.  Although this setup seemed complicated, we went ahead with the plan.  But then we met another nephew at the film, who offered us a ride home, so our Presto Passes are still left with about $15 each unused on them.  But that money can be used at a later date if we want to go to Toronto again.  (and we probably do.)

It was a misty day in Toronto on April 29, but we never got caught in any rain.  We arrived at Union Station about 9:00 and immediately compromised our health by going to Cinnebon for coffee and one of those things that cinnebon sells.  (I just call it a cinnebon, but I'm sure it has a name).  I always go there on my way to the December motorcycle show, it's a hard habit to break when you smell the cinnebons baking.  Then Mary Ann wanted to see the Skywalk, going from Union Station to the Convention Centre.  Across from the Convention Centre, is the Roundhouse Park.  It is an outdoor museum of trains, and in the actual roundhouse is the Steamwhistle Brewery, with free beer and $10 brewery tours.  Unfortunately they did not open until 12:00, and we had other things to see.  It only took about 20 minutes walking from Union Station to the Entertainment District, where the film was playing later at the TIFF Lightbox Theatre. So to kill more time, we walked about 20 minutes further to see the Kensington Market. Mary Ann likes markets, so this was a good walk, as we also passed through Chinatown on the way to Kensington.

The Kensington Market is not one big market building, it is an area covering several blocks around Kensington Avenue, where there are lots of little businesses. As you turn the corner from Dundas onto Kensington, you are instantly struck by the funkiness of it all.  And actually Dundas is quite funky, too, but in a different way, as it is still Chinatown.  Kensington has graffiti, narrow streets, motorcycles, bicycles and scooters parked everywhere. Many people look like they are either from the fifties, or possible from some alternate post apocalyptic universe.  And this is still early Monday morning.

In the afternoon, we met up with some of Mary Ann's family who had come to see the film.  The theatre was normal size, I don't know why I expected it to be a small screening room.  And surprisingly (to me) it looked about 3/4 full, or maybe more.  Not just family members either.  They mostly went to the Saturday showing, which was sold out.  That's why we had to go Monday. Andrew's film was under 20 minutes, but was being shown together with a longer documentary, so it felt like watching a normal length movie.

So now we are home again, and with our partly used Presto cards, we will find it much easier to plan our next outing to Toronto.