Was Slavery Allowed in the Bible? 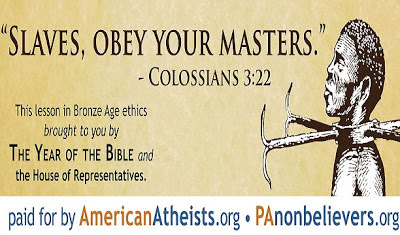 If you travel around the USA, you may come across a billboard like the picture to the left.  And you may wonder, why are they still arguing about slavery and about the bible being God's word?  It could be a legacy from the time of slavery.  The situation, (maybe oversimplified) is that today, there is a sizeable part of the USA that believes in the bible as the literal word of God. Others believe we need to interpret the bible for a modern world.  (Or don't believe it at all)

To anyone who looks further into the debate about the bible, it seems like the strongest support for the literal interpretation of the bible comes from the Southern Confederate states in the civil war.  Did the civil war have anything to do with this split on how the bible is interpreted?

I found this in Wikipedia: "Religious conflict over the slavery question"

Before the Civil War, most Americans held the belief that the bible was literally true. According to the proslavery side, was written in the bible that white people should enslave the black people.

The slavery debate raged on with each side combing through the bible for passages that supported their cause.  The pro-slavery side won the technical debate by a landslide.  Apparently there are a lot of passages in the bible supporting slavery, and almost none to refute it. So the literal interpretation of the Bible actually does support slavery. The reference given in Wikipedia is a book by Mark Noll, "America's God: From Jonathan Edwards to Abraham Lincoln. (2002)"  I don't have the book, but apparently it explains how the bible debate was won by the pro-slavery faction.  But the abolitionists felt in their hearts that slavery was wrong anyway.

The book "Slavery and Sin: The Fight Against Slavery and the Rise of Liberal Protestantism" By Molly Oshatz has some words about the debate on p 61:

"Christian abolitionists ... endeavored to make the case that the bible did not in fact sanction slavery, an argument that proslavery exegetes quickly dismantled... The most persuasive antislavery moderate of all, Harriet Beecher Stowe, avoided biblical argument in favour of narrative."


If it is true that a literal interpretation of the bible supports slavery, where does that leave bible literalists?  Today slavery is seen as an evil. Even the Southern Baptists have officially apologized for supporting slavery.  The only concession by literalists seems to be that the word slave was mistranslated.  If an important word like slave could be mistranslated (I don't think it was, but anyway...), what else could be mistranslated?

Before the war, three major branches of American Protestantism split into north and south versions because of their interpretation of God's will on slavery. The Methodists in 1844, the Baptists in 1845, and the Presbyterians in 1857.  The southern versions of these Churches could insist on an even stricter literal interpretation of the bible, while the northern branches had to use a more liberal interpretation of the bible, to support their view that slavery was wrong.  The Northern churches could begin to acknowledge that the Bible was written more for the ancient desert people than it was for 19th century America.

The debate that could have been settled by reading of the bible, ended up in a shooting war, with hundreds of thousands of Americans killed.  But even though the north won the war, southerners apparently remained convinced that the bible was literally true, while eventually conceding that slavery was wrong.  And that is about where we are today, with the bible literalists now attacking Darwinists and homosexuals instead of Abolitionists.  Hopefully this time it will not be resolved with guns.
Copyright the Lost Motorcyclist