Who Was More of a Car Enthusiast? A Prius Driver or Hitler? 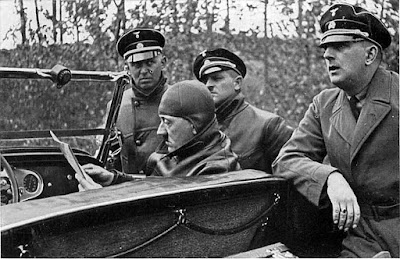 I was inspired to write this by the various discussions on Jalopnik regarding the Toyota Prius, and whether or not a Prius Owner was a "real" car enthusiast.

What is an average Prius owner, what do they look like, think like, etc.  Are they real automobile enthusiast or are they just ignorant eco-weenies?

Let's start with me.  I admit, I do not actually own a Prius right now, that is because I am waiting for the new Prius to become available.  Does this mean I do not qualify as a Prius owner?  Just because I am interested enough in the new technology to wait until the next and more advanced car comes out?  No, that means I'm a car enthusiast, i.e. I care about what car I'm getting, and if I have to wait for it, I will.

Now for some history, from which you may make up your own mind if I am a car enthusiast or not. I did not care much for cars until about 1960.  Our family did not have a car until 1961.  We had only one road to the outside world from our town.  But then I was about 12 or 13 years old, and I bought a Road & Track magazine on an impulse.  Actually, I still have that magazine.  I also bought a paperback book "Kings of the Road" by Ken Purdy.  Do you know that book?  Then congratulations, you may be a car nerd.  Yes, I still have that book too.  Soon after, I bought a subscription to "Car and Driver", and read every magazine that came in the mail voraciously.  I was very interested in cars.  I was car crazy, I guess, and other people started making jokes about my obsession.  Our family got its first car about that time, a little Envoy, the Canadian market version of the British Vauxhall.

I persuaded my Father to teach me to drive, he liked to take me out on the paved highway outside town, and let me drive on a very twisty road through the mountains.  Many years later, there was simple sign at the start of the road north of town: "Dangerous curves, next 200 km"  I guess at the time, we didn't know they were dangerous.  Of course the car had a standard transmission, and only about 35 horsepower.  Every hill needed on or maybe two downshifts. (There were only three gears.)  I had my first traffic accident at fourteen, driving without a licence.  Hitting the back of a Police car that was attempting to pull me over for having a licence plate light burned out.

I didn't drive any more until I was 17.  Then I failed my first drivers test, and had to wait until I was almost 18 before I could try again with the new family car: A 1965 Dodge Coronet with a 318 V8 and Torqueflite automatic transmission.  I was pretty relieved to pass that test.

A few years went by, I was in college, I had no money to buy a car, but my Dad often let me have the keys to the car when I was at home in the summer or at Christmas.  I don't want to write about the stupid things I did with that car, but I have memories, which sometimes I still share with my younger brother and high school friends.

By 1969, I still have no car, but I am graduating.  Instead of getting a real job, I end up with the Peace Corps (CUSO actually, because I am not American) in Africa for a few years.  While in Africa, I could afford a small motorcycle, so I bought a Honda 175 which I maintained entirely myself, by teaching myself mechanics, and I drove it all over the country racking up 15,000 miles.  That was my first motor vehicle of my own, and it started a life long love affair with motorcycles.  I had to sell that bike when I left Africa and came back to Canada.  But I loved it, and today I have two and a half of those bikes.  Yes, one looks exactly like the bike I had in Africa.  The other one is the wrong colour, but it actually was shipped to Canada from Africa where it had been used in the early seventies by a different CUSO volunteer.

Ooops.  I guess that means I'm not a real car enthusiast.  What was the definition of a car enthusiast again? Is it somebody who loves the technology, the driving skill, getting your hands dirty fixing a motor vehicle when it when it goes wrong?  Or is it strictly that you own a four wheeler that doesn't lean into curves, with nice doors to keep you safe, and windows and a roof to keep you dry and keep your hair from getting mussed up?  I think we need to answer these questions.  Or maybe each one of you Prius haters need to clarify exactly what you mean by a car enthusiast.

So to summarize, I don't own a Prius, and I don't even really qualify as a "car" enthusiast as I am probably more of a "Motorcyclist".  So be it.

There is lots more to my story. You probably don't need to hear it, because my point is, everyone is different.  You should be just know that everyone has their own story.  Don't judge me.  And don't say I'm not a car enthusiast just because I may soon be driving a Prius.

Picture: It is true: Hitler was a car enthusiast. I encourage you to read his story before judging.  If you haven't already.