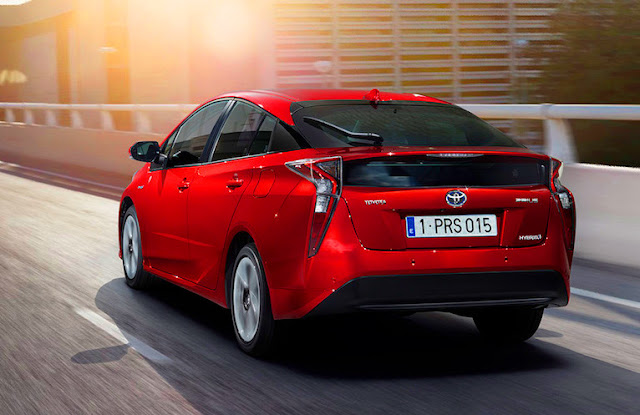 I have been waiting for about 6 months to get an idea of what the new Toyota Prius (Fourth generation) will look like.  Mary Ann wants to get one, and I'm hoping it will not look too horrible, as we will have only one car.

Last night was the big unveiling, followed by the usual slew of hate from the "automotive enthusiasts" out there on the Internet. Forbes Magazine (The Capitalist tool) titled article "2016 Toyota Prius Hybrid: World's Least Dramatic Car Gets a Dramatic Makeover".  The Verge announces "Toyota just launched an all-new Prius, and it looks weirder than ever".

But among the comments on this Jalopnik article, some are surprisingly logical. Such as:  Admitting the rear light doesn't look too bad, but then the first time if you crash it in a parking lot and it costs $500 to replace the light, but then a Ford F150 taillight probably costs more, but it has built in blind spot monitoring.

My own thoughts: "The first time"? I have never cracked a rear taillight in 50 years.  Neither has Mary Ann.  And anyway, isn't that what "Blind spot monitoring built in" is supposed to prevent on the Ford Truck?  But then I suppose some other hit and run driver might leave you with a cracked taillight.  And with my usual karma, I will smash the taillight the first week I have the Prius.

Then several other comments are the usual emotional hate that could apply to any new style of car or motorcycle: "It's fugly." or more emphatically "It's fug-fug-fuggitty-fugly."  And there is also an animated Gif showing a US army tank crushing a Toyota Prius. Those commenters definitely need to ease up.  World War Two is over, man.

My feeling is, the car doesn't look too horrible, that's all I really needed to know.  Mary Ann likes the taillights.  I like the "bump" on the hood.  I can get used to the look of the car, just like I got used to the Toyota Matrix and every other car I have owned.

The 2016 Prius has better gas mileage than the old Prius (so Toyota says), and now for the first time, independent rear suspension.  That could be good.

I'm interested in getting a different color  (our Matrix is silver). Toyota says there are seven exterior colours, which unfortunately is no more than is available with the current Prius. The current 2015 Prius has red, and six colours ranging from white to black with shades of grey and silver. The new red for 2016 is apparently made with a new process that is deeper or something.  I'll have to see that for myself, because in the unveiling photos, my computer screen has it looking the same as other reds.

Picture: New Toyota Prius in red.  I enhanced it on my computer with a little extra colour saturation (70%) Now it's very red.