Another Toyota Throttle Scandal: This Time It Won't Open 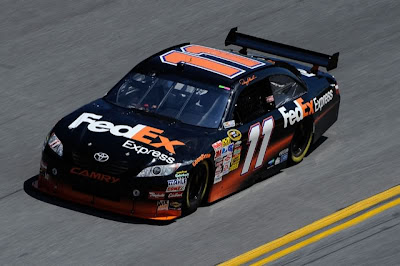 I just happened to catch the finish of the Martinsville NASCAR race on TV this afternoon. It was won by Toyota 1-2 in a surprise finish.

Just to catch up on the shenanigans in NASCAR, Toyota decided to compete in NASCAR in 2007, and stirred up a hornets nest of fans and competitors who thought that NASCAR should be for American makers only. Very soon after Toyota's debut, NASCAR officals got an anonymous tip that Toyota was using a banned substance in their fuel. They tested the Toyotas and found the substance, then imposed stiff penalties on the Toyota teams. Some people lost their jobs over this fiasco. Nobody really knows who did it or why.

By 2008, Toyota cars make too much horsepower for Ford and Chevy to compete, so NASCAR has a rule that says if you make too much horsepower, measured on their dyno, they will mandate a restrictor plate for your cars to reduce the power to the same as the competition. Toyota continued to win, and the competitors called for another dyno measurement. Obviously those Toyota cars needed more restricting. But during the dyno test, it was discovered that somebody had installed a small magnet to block the throttle from opening fully for the NASCAR inspectors. This of course resulted in further sanctions, and an even more restrictive throttle plate for Toyota.

Those were the conditions today as Toyota won 1-2 with the double restrictive plates. It was kind of a neat finish, where two competitors were trying to block the faster Toyota on the last lap, running side by side. The Toyota driver rammed one of them from behind, then moved behind the other car as it accelerated to keep up. Then the two cars in front hit each other, went off to the side, and the two Toyotas got through for the win.

Best NASCAR action I've seen in 45 years. And the drivers can even blame a stuck throttle for the bump.

Disclaimer: I have not followed NASCAR for 45 years. I do not understand the rationale behind restrictor plates, nor do I understand the big picture of who is racing what class and why. If I have made any misstatements, and you can clear me up on this, please leave a comment. I have never heard of restrictor plates being used in automobile competitions before, unless it was for beginner classes or training purposes.
Copyright the Lost Motorcyclist