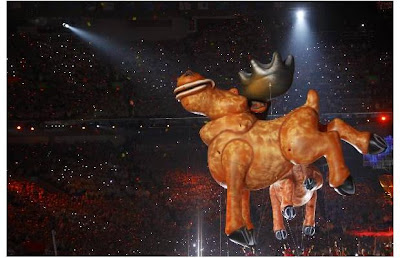 After the gold medal hockey game that ended the Vancouver Winter Olympics, I heard there was a poll that most people thought this hockey series was more significant than the previous all-time historic series, the 1972 Canada-Soviet Summit.

Well I was luckily around for both, so let me compare the two.

In the summer of 1972, I had just arrived back in Canada after three years in Sierra Leone. I had completely lost touch with hockey during those three years and I still remember my amazement on the airplane, reading about the planned hockey series pitting our best professional hockey players against the Soviet Union. This was a first, because for many years our Olympic team had been getting clobbered regularly by the USSR. By the rules of those days, no professional athletes were allowed to compete. Canadians had to be content with telling themselves that if our pro players ever played the USSR, the tables would be turned. And now it was going to happen.

As I continued to read the newspaper story, I realized just how out of touch I was. A brief mention that Bobby Hull was to be banned from the Canadian team. Apparently Bobby was playing for the Winnipeg Jets now. I never heard of this team, so I guess they added a new team while I was away. But next, I read the Winnipeg Jets were not an NHL club, but a rival league called the World Hockey Association, that I also never heard of before. It was this technicality that was causing Bobby to be left off the Canadian team. Can this much crazy stuff can happen in only three years? I was worried about what else had changed, and I had not even landed in Canada yet.

The hockey series took place in September, and ended with Canada winning in a cliffhanger in the last game.

But now to compare it to the significance of the 2010 Olympics. In 1973, the hockey series was an end to Canada's national myth of the superiority of our professional players. It also got ugly in several different ways. The Canadian fans were booing their own players in the games played in Canada. And when the series moved to the USSR, the Canadian team and the Canadian fans were harassed by the Soviet police and media. The whole series was not exactly sportsmanship at its finest. The clash of cultures. Differences in playing styles. The dismantling of Canada's long cherished national myth of hockey superiority.

Not only was Bobby Hull banned from playing, but also Canada's greatest player of the time, Bobby Orr sat out the series, to the dismay of both the Soviets and the Canadians.  And the reason Orr sat out was because of injuries caused by the rough style of play in the NHL, which also prematurely ended his career.  The Soviets started getting the idea that we had held back our best players and sent over a bunch of goons to beat up their players.

On the bright side, was the grit and determination of the Canadian team that in spite of bitterness from fans and foes alike, managed to claw their way back and win in the last game in the last minute. The drama was unmatched in hockey history, but it didn't reflect well on all of us or them.
Now for the Vancouver Olympics. Canada by 2010 has had many years to get over ourselves and we understand that we do not own the game any more. Since 1956, we have won Gold in ice hockey only once, in 2002. The Last time we hosted the Winter Olympics in 1988, we came fourth in hockey, and did not make it to the top ten in the overall standings.

Our top professionals now regularly play in the Winter Olympics, but many of the NHL players are actually Russian, Slovakian, Swedish and from many other nations. The USSR, our old nemesis, has broken up, and the USA is also quite a powerhouse of hockey. In the 2010 Vancouver games, the stakes were higher than just hockey. The games were held in Canada, and by the time the last hockey game was ready to be played, Canada had more Olympic gold medals than any other country. Not only that, but if we won the gold in men's hockey, Canada would have more gold medals than any other country in a single Winter Olympics since they started.

This time our rivals in hockey were not the hated communists, but our friends to the south, the USA. Just to highlight the changes since 1973, look at one of the players in the big game, Zach Parise. He is the son of J.P. Parise who played on the Canadian Team in 1972. Except that Zach is playing for the USA. His father played for Minnesota, and the's where Zach was born. In this gold medal game, Zach scored the tying goal for the USA with seconds left to go, to rob Canada of the Gold medal. Temporarily, anyway.

So to get back to the USA-Canada rivalry now. Canada has for a long time been in the shadow of the USA, our super patriotic, brash, loud, gun-toting, god-fearing neighbor to the south with ten times the population of Canada. Ever since World War Two, the entire world has looked to the USA for an example of freedom, and as leaders of the world both economically and culturally. Canadians have been modest and self effacing cousins, up here in Canada freezing our asses off, and wishing we were Americans.

But over the last 10 to 20 years, Canada has begun to develop a new personality. We have gradually set aside the debilitating bitterness between the French and English. No longer is Canada under constant threat of being torn in two by separatists on one hand and British loyalists on the other. Our economy is growing stronger, and so is our standard of living. In fact we seem to now be pulling ahead of the USA in both those areas, with a well regulated financial sector, and a health care system that the USA can only dream of. Our currency is pulling even with the US dollar also. Canada has also become well known and well respected in the rest of the world too, not just for a strong economy, but for our efforts at peacekeeping, our achievements in multiculturalism, and our stand on human rights. All is not perfect, but still appealing compared to what a pariah the USA has become.

The Vancouver Olympics turned an international spotlight on Canada at a time when the US image of freedom was waning, and the world was looking around to see who else had any new ideas to offer. 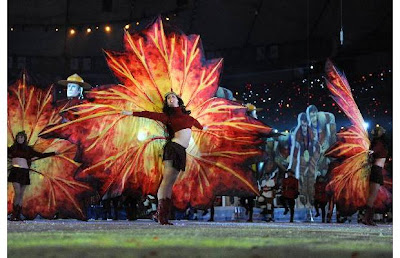 So I would say the 2010 hockey gold, and the Olympic gold record, and the showcase of the Vancouver Winter Games, all together, is indeed a bigger and more significant event. For the sport of hockey itself, I hope it helps put an end to the idea that the fighting  in regular NHL games is necessary. For the way this will help pull Canadians, both old and new together, and help us to stop thinking of ourselves as losers in sports and second best to the USA or anyone else. And for the way the rest of the world may take more notice of us as we continue to evolve into a really decent country (as soon as we get rid of our present government).

After the game, Mary Ann and I went for a walk. A young girl was standing on the corner of Belmont and Highland with a Canadian flag, and every car passing by was honking its' horn. Apparently spontaneous demonstrations were breaking out all over the country. The 1972 series was meaningful and memorable in its own way, but I really think this one is more positive for Canada as a whole.
Copyright the Lost Motorcyclist