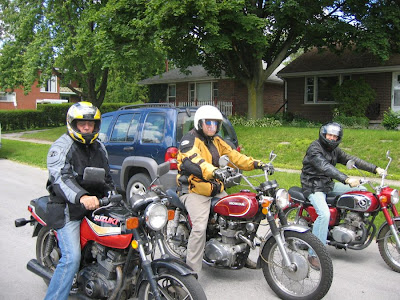 Even though many motorcycles today are bigger than they need to be, a topic that is rarely dealt with in magazines is downsizing your motorcycle. Over the last 40 years, I have most often either doubled the horsepower or doubled the price each time I bought a new bike, with the exception of the current one, the Vulcan 900. I'm not counting my vintage bikes, where I am buying more for nostalgia than for transportation. Unlike all my other purchases, the Vulcan 900 was a downsize of the BMW K1100LT in price and horsepower, by about half, although it is still about the same weight.

I think that if there was the right bike out there, I may be tempted once again to double up on the the horsepower. But after the BMW, nothing looks that much better to me. The newer BMW's are not so superior to the 1992 K1100LT to make it worth trading up again. Now maybe if they had a really exciting looking 6 cylinder sport touring bike, I might be tempted, but that bike may be several years off if it ever does appear in the showrooms.

Frugality is one of many reasons for wanting to trade down, and none of the other reasons for downsizing are really exciting either. My wife had bought her own bike a year earlier, and it made more sense for me to get a smaller bike just because I would not need to carry her with me on long trips, and I was sure I wouldn't need anything like a new BMW to keep up with her Burgman.

Getting old is another reason to get a smaller bike, if you have trouble reaching the ground, or swinging a leg over the seat, or holding it up. Sometimes people get stiff as they get older, and a lot of bikers are getting older these days.

Where the Vulcan may still fall short of the BMW is a road like I-75 in Detroit. There, the Vulcan, which felt so smooth and steady at 100 kph, would vibrate and feel unstable at about 140 kph. But on this road, the BMW's tingling vibration would smooth out, and you could begin to appreciate the steering, which is just the right balance between being stable in the wake of the big trucks, and flickable around the frequent potholes and debris. The BMW throttle, which was difficult to modulate at 100 kph, was perfectly suited to matching the bike's speed to the speed of the surrounding traffic on I75. With a little extra twist, it would accelerated or decelerate with the amount of force needed to merge into other lanes. Normally you would not need even need the brakes unless there was a traffic jam ahead.

On the moderate speed roads around Kitchener, the BMW's handlebars would buzz at 100 kph. The throttle twist grip had to be almost shut, and tended to jerk the bike with the slightest movement either opening it up or closing it down, which was kind of annoying. The Vulcan on the other hand, was designed to ride at these moderate speeds. Modulating the Vulcan's throttle at 100 kph is effortless, and the speed never creeps up without warning. The Vulcan's lazy gear changes are so smooth as to be almost unnoticeable. Even the vibration is just a gentle reminder that the engine was running, instead of a harsh buzz.

The Vulcan is not a corner carver. If you hit a bump in a corner, you need to correct the steering a bit. Every once in a while, I scrape the floorboards on a corner, a reminder to slow down. These things never ever happened in all the time I had the BMW. But since I only meet one high speed curve every half hour or so around here, this is not a problem. And even if I was on a trip with a lot of curves, the Vulcan is more than adequate to keep up with any normal traffic.

The Kawasaki also happens to be a cruiser, your feet are up forward, and the handlebars reach back, which makes it easy to lean on a backrest.

I don't think I miss the horsepower and the speed. I have had no speeding tickets yet with the Vulcan, but it's only been three years. Traffic in Southern Ontario is slow enough that the Vulcan 900 can easily get past it if I want to, especially if I am riding solo. But I hardly ever need to do that if Mary Ann is riding with me on her Burgman. The BMW would need an autobahn or mountain roads with high speed traffic (or sparse traffic) to really have fun, and Mary Ann would have to be a passenger to make full use of the horsepower.

1. The runaway Toyota Prius in California that got so much press attention turns out to be another "Bubble boy" stunt on closer inspection.
http://www.hobbub.com/news/james-sikes-is-a-liar-runaway-prius/

3. The March Equinox is Saturday, but day and night will be equal length in Kitchener on Wednesday. The explanation is here:
http://www.timeanddate.com/calendar/march-equinox.html

Picture: A family motorcycle ride a couple of years ago. Paul and Mary Ann didn't have motorcycle licences then. The newest bike in the picture is the 1986 Suzuki 400, and it is the only one that is gone today.
Copyright the Lost Motorcyclist