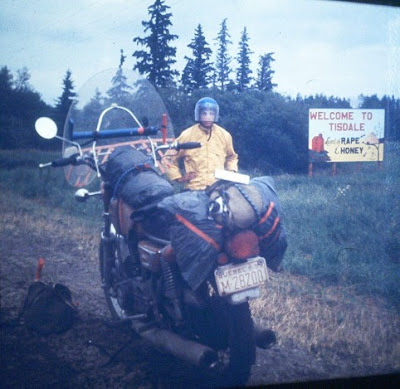 A long distance motorcycle is something that you cannot find in a store. In fact, it seems there is no real definition of what a "long distance" even means. To some, it may mean burning an entire tank of gas without stopping for a snack, to others it is nothing less than one complete circle of the globe. I'm going to go with this rule for long distance riding: at least one overnight stop where you carry on going further the next day. I don't usually do that unless I'm serious about getting somewhere I can't get to in one day.

For long distance riding you would need to start with a bike that can keep up with traffic on the major highways, because if you really want to get somewhere in North America, you probably will have to deal with freeways at some point. That might mean a minimum of 400cc or thereabouts, if solo, and maybe 500cc if two up. And you would want a bike that is reliable and has a reasonable dealer network and parts supply. Because even if you can't find a dealer, you should be able to get parts couriered to you anywhere in the USA or Canada, then get a general purpose mechanic to do the work. Smaller bikes, and less reliable bikes can of course be used, but be aware that this would be called an "Adventure", to be written up for the edification of others, not as a normal way to do long distance motorcycling.

Next, think about luggage. You have to figure out what you're taking with you, and hopefully you will keep it light. But make sure you bring at least spare clothes in case you get soaked, rain gear, and some extra motorcycling gear, as you will be pretty sure to need it. Make sure your luggage is waterproofed and windproof, and securely attached.

Finally consider some weather protection. When you are far from home, you cannot avoid meeting unexpected weather. A windshield or fairing in front of you. Then splash guards for knees and feet are very helpful.

In the preparation, I think it is best to get the bike ready a week before leaving, and do some riding to test it before you go. Just don't be fiddling with it up to the last minute.

Every bike I have ever had, with the exception of the Honda CD175, has been used for long distance motorcycling. But none of them ever broke down far from home, although I had to troubleshoot problems a few times and do a bit of minor repair work along the way. For example a BMW saddlebag hinge cracked and was replaced in South Dakota. A two-stroke muffler plugged up in Saskatchewan. The BMW developed an oil leak in the rear brake in northern Quebec. I blew a few fuses because of electric vests in two different bikes. I had to stop early one night because of rain water on the spark plugs of my Honda CBX. 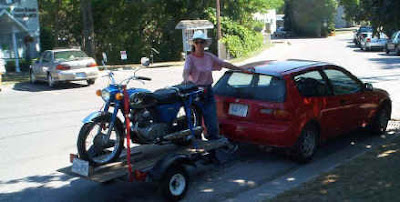 I had to be rescued once when my Honda CD175 threw a cam chain. I was not on a "long distance" ride, so Mary Ann could come to get me with a car and trailer in less than a day. But it did happen at about the furthest distance from home I had ever ridden that bike.

The BMW K1100LT went the furthest, and in the toughest conditions, of any bike I had, but it was also the only one to have a sudden catastrophic failure. At least it had the good grace to do it at the top of a hill where I was within coasting distance of home.

Pictures: Tisdale Saskatchewan in the '70's, when rape was rape, not "canola". Second picture is the scene of the rescue in Grand Bend, Ontario. The dead Honda had thrown a cam chain and it took me all winter to repair the engine. Next spring, it was back on the road with every single internal part of the engine replaced, except the cam chain. That's one difference between how shade tree mechanic and a pro would work.
Copyright the Lost Motorcyclist