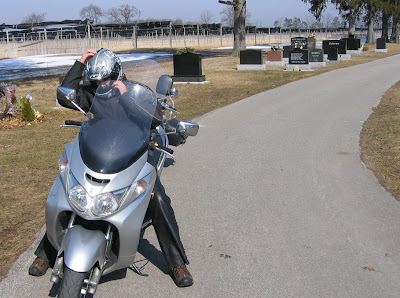 It was Mary Ann's first ride of the season. Our plan was to ride to Port Dover on Tuesday March 9, and have a Perch dinner at Knechtel's. Of course her Burgman started up immediately. It took only two stabs at the starter button to fire up and keep running after almost four months sitting in the garage just waiting.

We have had a run of nice weather, the only thing I don't like is that the snow is still melting and causing a bit of water in some places on the road. So the bikes are getting a little spray on them. Otherwise, plenty of sunshine and warm enough that I don't need handlebar muffs or an electric vest. There are a number of other bikes out too.

On our trip down there was one situation where once again I came up behind a slow moving farm tractor in a village, pulling trailers with piles of stuff (I don't remember what) that blocked my view of the road. I pulled out to pass, and tried to not make Barry's mistake last year of exceeding the speed limit and running into a radar trap. This time I went around nice and slow, but immediately ran into a four way stop. It's hard to know what to do about tractors pulling trailers blocking the road. Some people follow along for miles at very slow speeds, adding to the confusion, some drivers go around at the first opportunity.

When we got to Port Dover, we almost had another accident. I put my helmet in the underseat compartment of the Burgman when we parked at Knechtel's and started to take off my jacket. Mary Ann had to take my helmet out again just for a minute to get hers in, and placed it on top of the seat, but then the seat moved and the helmet started to fall off. They say right in the instructions for the helmet, don't place the helmet on the seat. Apparently if it falls off and the shell cracks the pavement, you should replace it. And naturally, they always fall off if placed on a seat, even if it's only for one second. Luckily I caught it, it's really bad luck when you have the same helmet for 7 years and never drop it, then the third ride with a brand new helmet, down it goes.

Knechtel's was almost full at 12:15, and Mary Ann figures it must be a popular place with the locals. A perch dinner costs $10.00 and includes a salad bar, four pieces of perch, fries and coleslaw. It doesn't sound like much, but it really does taste good.

We left our bikes parked and went for a walk along the beach after dinner. As we walked along, we were passed by a guy on cross country skis. That's because for some reason there is a shelf of ice and snow between the sandy beach and the open water of Lake Erie, that you can actually ski on. We explored around the town a bit, and ended up at Tim Horton's for a coffee and donut. That's where you usually meet the motorcyclists on weekends, but even during the week it seems some riders like me, who are able to get out. Mary Ann is not usually interested in standing around talking about bikes, but when I'm there by myself I do that instead of walking on the beach.

On our way back to Kitchener, I was feeling kind of tired, so we stopped for a rest in Paris where the railway tracks go over the river. I usually like to go down the embankment where I can lay down on some concrete slabs that feel as comfortable as a Lazy Boy recliner, but Mary Ann stopped me and brought a sign to my attention that says "Do not pass this point". So instead I found another slab that was just as comfortable, except that it was actually a historical marker for the site. Mary Ann was horrified, but as I pointed out, there was no sign saying I could not use the historical marker as a backrest. 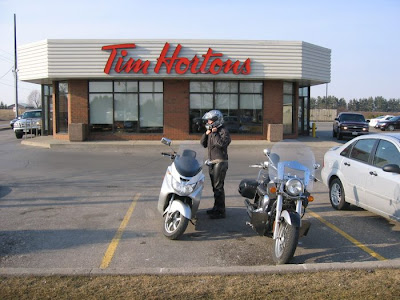 We decided one more stop for coffee in Paris before heading home. I'm not used to coffee any more, as I almost stopped drinking it because of my bladder stone, which has now been removed. So I found out one medium Tim Horton's coffee at 3 PM managed to wake me up and keep me awake until 2 AM.