Why Does Toyota Make Big Honkin SUV's and Pickup Trucks? 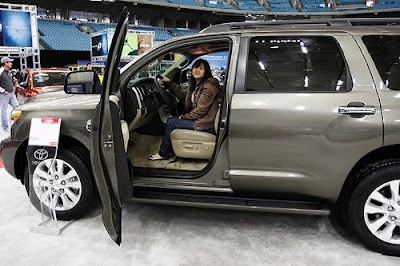 For a company that claims to be green, Toyota makes a lot of large SUV's and pickup trucks. What could be more natural than making these honking big luxury all wheel drive vehicles if it makes money? Well, it's not that simple.

The only place in the world where these large gas-wasting vehicles sell well is the USA, and that is because of low gasoline prices, which are kept low by the political danger of imposing taxes on fuel in America. And even in America, as we have seen, the price of gas sometimes rises to the point that vehicle sales decline. (especially the gas-hogs)

Toyota started off in the sixties sending fuel efficient cars to the USA because that's what they made for their home customers, and that's what they understood. Not only that, but since 1963 there has been an import duty on light trucks coming to the USA of 25%. It is called the "Chicken tax" as this import tax is applied to potato starch, dextrin, brandy, and light trucks in retaliation for a European import tax on American chickens. OK, sorry that this is getting complicated but really so many things we consider natural came about through unnatural and complicated legislation.

Anyway, Toyota continued to make cars for the US, content to ignore the truck market. Then the US congress began to pass laws requiring increasingly strict standards for fuel economy, crash safety, and clean burning engines. Toyota complied, and set their engineers to work conforming to these regulations. Meanwhile, Detroit began to exploit a loophole they had at their disposal, by getting light trucks exempted from all these laws. Once again, Toyota more or less ignored the unfairness of this, and continued to build fuel efficient cars. The American car makers, on the other hand started pushing the definitions of what exactly was a light truck. Eventually, Detroit managed to include all minivans as light trucks and even started making pickup trucks with no bed at the back, calling them SUV's. Toyota still had no response, but things were getting worse. When gasoline prices declined in the nineties, sales of SUV's, pickup trucks and minivans increased to the point that cars became an endangered species in the USA (literally!). And finally, I guess the thing that pushed Toyota over the edge was the proposed CAFE standards.

Although CAFE (Corporate Average Fuel Economy) did not pass, it threatened Toyota's existence in the US market. The law proposed a percentage improvement in fuel economy on each corporation, over time, starting with their existing fuel economy average. The problem was that if Toyota was starting with mostly fuel efficient cars, it would have to compete against American makers who were starting with wasteful vehicles. It is hard to increase the fuel economy of a Corolla, but easy to do if you are starting with fuel wasting American style vehicles.

As a result of (or sometimes anticipating) all these pressures, Toyota decided to enter the truck market in the USA, so that they would be on an equal footing with the Detroit companies in case CAFE ever became law. To do so, they set up truck factories in the USA, because the chicken tax of 25% would have made them uncompetitive to import from Japan. And now we have the Toyota Tundra and the Toyota Sequoia, and several other big honking things you would not expect to find many years ago in a Toyota showroom.

Last year, both GM and Chrysler declared bankruptcy. They were relying too heavily on their big truck sales for profits, and when fuel prices went up along with job losses, many people stopped buying the trucks and SUV's. Toyota fared better and became the world's biggest automaker because of their superior line of cars.

But now Toyota is facing billions of dollars in lawsuits in the USA because of the not yet proven "runaway acceleration" syndrome.

So it's not always as simple as you might think.

Picture: Photoshop was not used in this picture. I did not reduce the size of the person in the drivers seat. The Sequoia is just a very big vehicle, at least for a Toyota.
Copyright the Lost Motorcyclist