Easy Ride to London in March 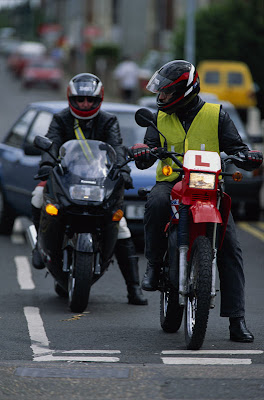 Today the plan was to visit some friends, but that got postponed. With a full day of perfect weather, almost like April, I decided to go to Hully Gully in London. I passed through Stratford on Highway 7, the main road from Stratford to London. It is too rough to be enjoyable. Maybe if I was testing the shocks, I might want to go there, but not for normal recreation. I finally gave up and headed off on a side road in the general direction of London. That's something you really don't want to do without a GPS to guide you, and I don't have a GPS. Eventually by pure luck and intuition I did end up in London. Then I went through the middle of the City, heading west to intersect Wonderland road. I did know that Hully Gully is south on Wonderland. Somewhere on Wonderland I started to get hungry, so I pulled over near a McDonald's. They had a play area, and it's March break, so I started looking around to see if there was anything else more appealing than a Big Mac and a bunch of screaming kids. I was virtually surrounded by fast food establishments. Wendy's Taco Bell, KFC, Tim Horton's, to name a few. Then I saw right behind my a little place called the "Out 'n Back Cafe", specializing in lunches. I decided to chance it, so I left the helmet on the bike and walked in. It was small but there were lots of people in there eating lunch, that was encouraging. I went over to the cafeteria style lunch counter, and ordered one of the specials which was chicken with herb sauce on rice. As I gave my order, I thought I caught a flicker in the eye of the girl on the counter which probably meant "Ohhh! very bad choice, but I'm not allowed to say that with the boss right over there." Actually, it tasted a lot better than it looked, because I don't normally like the look of green sauce. But unfortunately they had to add an awful lot of salt to bring it up to that level.

Before I went to Hully Gully I had an idea in mind of what I was looking for. I wanted to see the new 2010 Honda Shadow 750 RS, which is a little bit retro, and a little bit Harley Sportster. For me what makes it significant is that it is competing head to head with the Sportster at the same price level, and traditionally Hondas were cheaper than Harleys. However, with the weak US dollar, prices are even. In my opinion, a Honda is actually worth more than a Harley, and I would pay more for one myself. But a lot of other people think that Hondas need to be cheaper to sell. Time will tell. Naturally, before I left home, I did not phone ahead to see if they actually had one of those bikes, why spoil the surprise? As I pulled in to the parking lot, I noticed the sign said Yamaha and Suzuki. Not Honda. So I went in anyway, bringing my helmet with me because I don't trust those biker types in the parking lot.

I actually saw a few Hondas in the showroom. As I was walking around looking lost, a lady came up to me and asked if I was out for a ride with my helmet, and if I was looking for something in particular. I said are you not a Honda dealer? She said, they were for about 27 years but lost it two years ago, and now they have Suzuki and Yamaha. She asked me if there was anything other than a Honda 750 RS I might like to look at. I said how about a Kawasaki Concours 1400? She said, that would be a Kawasaki, we have Suzuki and Yamahas. Well then, that was a fruitful visit. On my way out to the parking lot, I noticed that I was parked next to a Harley Davidson touring bike with the helmet sitting on the seat, right where my Scorpion Helmets instruction manual says I am not supposed to put it. I looked a little closer and saw this sticker "In case of accident do not remove this helmet without prior inspection of Doctor", and a whole bunch of other legal boilerplate to scare the bejeebers out of Emergency Aid Workers. But the funniest part was that the helmet was just a little plastic beanie, actually easier to remove than a baseball cap. Usually those warnings go with hard-to-remove full face helmets.

So I headed back through the city aiming for Richmond street and just as I passed Masonville mall heading out of town, a BMW rider pulled onto the street in front of me. So I decided to fall in behind rather than rudely pass and start a race. As I followed along, I was kind of shocked to notice the BMW rider was hand signalling all moves, in addition to having the blinkers signalling the moves. He or she even signalled when moving side to side in the same lane. Then also hand signalled braking (which apparently is left arm out and forearm pointing down.) I'm not saying this is bad driving, but it is different. I use hand signals myself, but I use them to indicate something unusual that the driver behind may otherwise misinterpret. For example, if I'm making a left 20 metres before a big intersection, where the other driver may think I'm turning left at the big intersection.

A rule of thumb I usually go by is BMW riders are the most enthusiastic about rules, and Harley riders are the least. So that could be one explanation. But this was pretty extreme, even for BMW riders, so my other theory is that the BMW rider was doing an official observed road test where if you want to pass, you have to drive in a special way that nobody else ever does.

So just to complete the day I had to make one more stop at Tim Horton's in New Hamburg. As I was looking over the selection, I remembered my doctor's warning: Lots of fruit and veg. So I picked the strawberry filled donut.

Just before I got home, a sign of global warming.  Morty's Pub on King St. in Waterloo had the outdoor patio full of customers on March 16th.