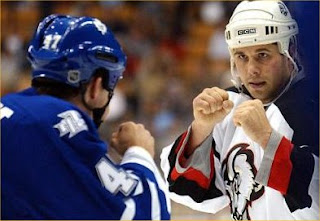 With Spain considering a ban on bullfighting, is it time for Canada and the USA to ban ice hockey? (Because the NHL covers both countries)

Don Cherry had an outburst against people who are against fighting in hockey. This got me thinking. There is a movement in Canada that seems to be starting, to investigate the damage caused by fighting in hockey. Don Cherry, the commentator on CBC hockey games is one of the most unabashed promoters of fighting in hockey and he was visibly upset with the attitudes of some of the ex-players who had said something about fighting. Don Cherry called them "pukes and turncoats", as apparently these guys had been fighters themselves during their NHL careers.

No other professional sport does this. This is what I believe. In the National Hockey League version of ice hockey, a certain number of players are recruited by each team to do the fighting. The coaches send the fighters out when they are ready for a session of bare knuckled boxing, and the hockey game is temporarily suspended while the fight is going on. These are not spontaneous fights between hockey players. These are planned fights between athletes hired for their fighting abilities (most of the time - occasionally some other player will be attacked.)

They say that "fighting is part of the game". It is not. I have seen plenty of games with no fights (e.g Olympic hockey). It's time for NHL hockey to ban fighting, it is a very easy thing to do. Just don't hire fighters, and give stiff penalties for fighting. And of course, fire Don Cherry, that loudmouth ignorant embarrassment. (I Googled "fire don cherry" and got 28,000 hits.) Hire a commentator who knows hockey. Let's get back to the sport of hockey, which is not a bad game without the fight fans screaming for blood.

Picture: I got it off this website. There is a video also, which I did not look at, but I assume proves my point, that the fights are a separate sport from hockey, and should be as illegal as bare knuckled boxing.
http://www.maniacworld.com/best-hockey-fight-ever.html
Copyright the Lost Motorcyclist