Tinkering With the Riding Gear: Helmets 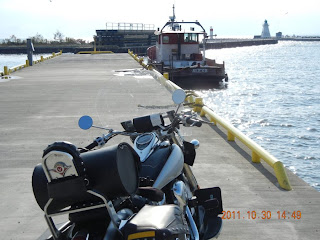 We often hear of tuning up a motorcycle, but rarely of tuning up the gear (i.e. clothing) for a motorcycle ride. Yesterday, "The Lost Motorcyclist" (me) decided to adjust his (my) gear. Recently I have bought a new helmet that needs a better attachment. And another problem, we are coming into some cold weather, when my face shield must be lifted frequently, but the pivot is sticky.

On my Vega half helmet, the D-rings keep jamming when I try to tighten the strap. I decided to forget about the D-rings and buy one of those add-on snap clips that make the helmet much easier to attach and undo the chin strap. So I went over to Zdeno and asked for the chin-snap thing, which the girls at the counter immediately recognized as a "quick release". So I got what they said, it was an "Echo Quick Release" for $12.00 plus tax. I've bought some of these before, but this looked like a new design - three pieces instead of the usual two (like Mary Ann's helmet). I tried to put it on my full face helmet outside in the parking lot. At the same time, I was trying to help another customer stuff his purchase into his saddlebags. When he saw me looking puzzled about my "quick release" he suggested I go back into the store and let the girls figure it out for me. I said "Not before I at least read the instructions." Later when I got home with my quick release working properly, I remembered I wanted to put it on my half helmet, but now I couldn't figure out how to get it off the first helmet. I checked the Internet. One guy had hacksawed his off when he realized it took longer to do and undo than regular D-rings. This didn't sound too good. Somebody else said that their wife used one, had an accident and the helmet came off. Even worse!

A web page by the Echo company explained (with pictures) how the get their quick release off a helmet. Their method worked fine. But now I was worried about all the consumer complaints I read about. I could tell right away that this helmet quick release was harder to snap on and off than all the other ones I have used. But that might be a good thing in case of an accident. However there was one other problem, and that was if you don't snap it properly, it can jam in an insecure position.

I tried snapping it off and on many times, and basically, the spring is a lot stiffer for the release clips than the other quick releases I have used. And yes, it is possible to get it crooked, but some practice could avoid that. Some people apparently do it up looking in a mirror, but really I don't think that is necessary. As a final test I asked Mary Ann to put it on and take it off. She looked at the quick release clip first then put the helmet on her head and snapped it correctly. Then she had a bit of trouble getting it off, she could not feel the release buttons at first, but only because they are different to hers. Then I tried the helmet myself with gloves on. It's quite hard to put on with gloves, but not impossible, and fairly easy to get off.

My final analysis: this quick release looks like it might be even safer in a crash than any previous quick releases I have used, despite the three piece design. Actually, the two steel pieces end up locked to each other, and the third plastic piece simply keeps the steel pieces aligned. It hooks up very positively, and will not release very easily by mistake. But the Echo is a bit harder to snap and unsnap than the others. Some people may not have the patience for this, I suppose.

I remembered the face shield was hard to lift on the full face helmet. In the summer this is not too much of a problem, but in the cold weather, I have to move the face shield up and down frequently - either to prevent fogging at a traffic light, or to keep my face warm at speed. It was getting so stiff, that when I lifted it up, it tried to move the entire helmet on my head. So I took off the shield and put some Vaseline (petroleum jelly) on the rubbing parts in the hinge. That seems to do the trick, it was very easy to open and close on my trip to Port Dover today - and it still holds its detent positions in between.

So it seems that with motorcycles themselves getting more and more maintenance free, I am going to have to get my jollies tinkering with the riding outfit instead. At least I can do that inside the house in the winter, where it's warm.

Picture: I took this on the other side of Port Dover harbor channel today.
Copyright the Lost Motorcyclist