A Historical Question about the Waterloo Region, Ontario 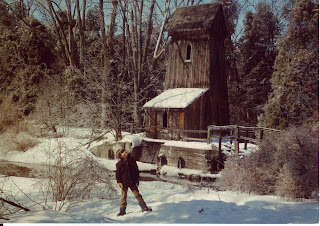 Yesterday, "The Lost Motorcyclist" (me) had the opportunity to go on a historical walk around one of our local quaint villages, known as Blair, Ontario. Previously, my only knowledge of Blair was that it was a 50 kph s-bend with a few nice looking old buildings, and it was on the west side of the Grand River, opposite Cambridge. It also used to have a good bar for bikers, the Nicholson Tavern, which closed many years ago. But during the walk, I found out several things. Blair now has both a Krishna and a Hindu temple. (weird, but not really the subject of this story). And Blair was the first European settlement in Waterloo Region, with notably the first gravesite, cemetery and school. This discovery got me thinking, that today Waterloo region has three major cities: Waterloo, Kitchener, and Cambridge, all over 100,000 people. Blair is still practically a pioneer village, seeming to have hardly grown at all and the entire thing could almost be considered a living museum of the 1800's.

I decided to investigate on the Internet why Blair is so small, and why it has been overtaken in size by almost all the other settlements in Waterloo region. I suppose I could have asked the tour guide, but it's a complicated question, and it was kind of cold yesterday, and also a bit hard to hear the tour guide with all the traffic noise.

To follow the history, you need to know that community names have changed over the years. Kitchener used to be called Berlin until WW1. And when it was first settled, it was called Sand Hills. Cambridge city is made up of three previous towns of Galt, Hespeler, and Preston (of which Galt was the largest, and was originally called Shade's Mills). Blair was named Shingle Bridge, and Carlyle, before finally being named Blair.

So to begin with, Blair started off around 1809 as a Mennonite settlement for a few people coming up from the USA. Although it was the very first European settlement in Ontario that was not on the shore of the great lakes, its settlers had no grand vision of becoming anything more than a good place to live. The founders of Galt, about seven years later in 1816, had a big vision of bringing in many settlers from Scotland. They started with a very large tract of land, which they subdivided and then sold to settlers that they brought in from Scotland. They picked a site for a town to be the centre of all this activity, and in 1825 a post office was set up, which was called Galt. At the time the post office opened, Galt was the largest, and would remain the largest community in the Waterloo Area until about 1900. Blair would not get a post office for another 30 years after Galt's.

Then in about 1900, Galt was overtaken by Berlin in population and importance. The community of Sand Hills, which had taken the name Berlin in about 1833, had experienced an influx of immigrants from Germany between 1833 and 1900 that was big enough to overtake Galt. Why did so many Germans immigrate at that time, and why did they come to Berlin? The second question almost answers itself: Because it was named Berlin. But that's not the whole story. Most immigrants tend to go to the largest cities, but there was a problem with German immigrants going to Toronto that may have diverted the bulk of them to Berlin. In the 1800's Governor Simcoe attempted to get a large group of German immigrants to move to Markham, just north of Toronto. In this plan, he recruited William Berckzy whose biography is in the credits for this story. William Berczy brought in some Germans and began setting up the town of Markham, and extending Yonge Street from Toronto to Markham, but ran into some difficulties. I can't tell if it was because Torontonians were suspicious of Germans moving in so close, or just financial bad luck, but the deal fell through, and there was considerable ill will between Berczy and the establishment. Hence I assume Germans felt less welcome in Toronto than Berlin, Ontario. And the town of Waterloo, being next door to Berlin was equally welcoming to Germans. The name Waterloo, by the way, is not only named after the site of a great British victory over the French. We also sometimes forget that the Battle of Waterloo was a joint effort of Germans and British.

There were a lot of German immigrants to Canada because Germany is a very big country in Europe that did not really have it's own colonial destination for its people. So, many of the immigrants to Canada were Germans. Canada generally did not object to Germans because after all Queen Victoria was originally German. Also, many Germans had fought for England against the Americans in the revolution, so Germans were actually seen as being more loyal to Canada than Americans. (all that would change with the animosity of two world wars, but hopefully now is almost forgotten).

Picture: I found a picture postcard on the site below of one of the first power generating stations in the Waterloo area - it did not use electricity to transmit the power as we do today. We had a chance to walk around it yesterday in Blair on our historical tour.