It Grows on You 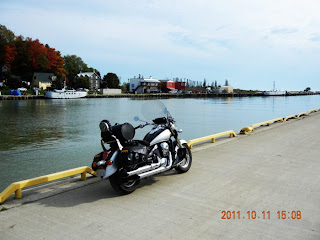 There is an expression about something that "grows on you", which means that it takes time to get to like something. This usually happens when I get a new motorcycle. At first I'm a bit uncomfortable with it, then with time I start to appreciate it.

The process of "growing on me" happens in many different ways. Most importantly is the appearance. Often I think new motorcycles are a bit strange looking. But with time, I sometimes see why they look the way they do. Or maybe I just get used to it. When I first got my Vulcan 900, I was a bit put off by all the fake chrome covering the bike. With time, I have removed or covered some of it. And now I realize the fake chrome is a very durable finish, in some cases better than real chrome. Also, as the bike gets older and dirtier, the chrome bits keep it looking almost new. So appreciation begins to take hold as "The Lost Motorcyclist" (me) understands better why the bike was finished that way.

At first I didn't like the look of the tires. Way too fat, I thought. But with time I found out that they lasted twice as long as the tires on my old BMW. All of a sudden they look good to me, and the BMW tires look too skinny. But I was remembering the Vulcan's handling was heavy compared to the precision of the BMW. So I decided maybe I should check the tire pressures, as heavy handling is sometimes caused by loss of air. Each tire was about 10 psi too low, and when I pumped them up, the handling returned to acceptable - although not quite like the BMW. So now the balloon tires are looking even better.

Other than appearance, reliability is an issue for me, and the longer the bike goes without needing repairs, the better I like it. Two days ago I was starting off on a trip down the 401 but when I got to the corner of the street, I saw a cloud of oil puffing out the front of the engine. I thought "great, now the engine has a hole in it." But no, I had added some oil and forgot to put the filler cap back on. It was not entirely my fault, I will explain why. On my previous bike, I forgot the filler cap once, and developed the habit of leaving the filler cap on the footpeg so I could never forget it again. I continued doing the same trick on the Vulcan, but the Vulcan has a strange system of checking the oil. You have to hold the bike upright (with no centrestand this is tricky) to check the oil level. While I was leaning the bike over, the cap slipped off the floorboard and I forgot about it until I saw oil coming out the engine. So I still don't like the method for checking oil level, but eventually I will remember to put the filler cap back on before riding away. When that happens, the bike can "grow on me" a little more. Until then I am a little put off by the oil level checking routine. But one big difference: the filler on the Vulcan is at the front of the engine, where at least I can see it the cloud of oil before I get past the end of the street. On the BMW I didn't notice the oil until the next exit on the 401.

When I first got the Vulcan, I thought the seat was too low. The salesman pointed out that I could always add an aftermarket seat pad if the seat was low, so later on I did do that. With some experimentation, I have found a seat pad that works for me. But with a "normal" height seat, adding a pad is a problem because you will not be able to reach the ground easily. Now I have an appreciation for low seats. And I also found out that if I take off the pad, in the rain or cold, I can duck down behind the windshield more easily. So two unexpected benefits of the low seat.

I'm wondering why the two mufflers are on the same side. I don't see any point to it, and it creates a problem for the passenger footpegs and saddlebags. Because of the twin stacked mufflers on one side, the saddlebag must be shallow, and the passenger footpegs are cramped. And yet almost all cruisers follow the same pattern (except for the touring models like the Nomad.)

When I first got my BMW I was a bit uncomfortable with the idea of having a BMW, which had the image at that time of a luxury vehicle for yuppies. Before long, I started to like having a BMW identifiable brand. When people asked my what kind of bike I had, there was a good answer. But since getting the Kawasaki Vulcan, the conversation goes like this: "Is that a
Copyright the Lost Motorcyclist