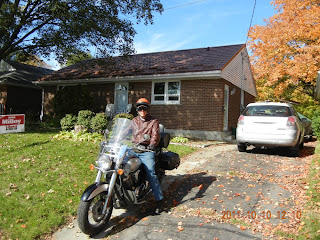 For all you people who think a warm day proves the Global Warming theory, or all those who think a cold day proves it is a gigantic hoax, I would like to explain why you are wrong.

Today I went down to Port Dover on my motorcycle and it was about 25c. This is at least 10 degrees C over the normal average high for this time of year (Oct 10). It is the Canadian thanksgiving weekend, and I cannot recall seeing people sunbathing and swimming on this weekend before.

But even this strangely warm day does not prove global warming, because it is still within the normal range of temperatures. In the winter we can have highs of -20c, and in the summer highs can be up to of +38c.

Global warming theory predicts a change in average temperature a hundred years from now of only about 2 degrees Celsius, which is so small that you could not "feel it" even if it were 100 years in the future and global warming (for the sake of argument) had come true.

And while I'm in the mood for an educational blog message - Canada's Thanksgiving comes a month earlier than the USA because we have an earlier harvest, not because we need a head start on our prayers to God. And Al Gore did not "invent" global warming, other scientists had proposed it long ago. There is a Youtube video with scientists from NOAA warning of global warming in 1984. The video could be mistaken for something produced this week, because it is still close to current scientific findings.

Picture 1: Me leaving home this afternoon, wearing my warm weather motorcycle gear. Only a t-shirt under the unlined leather jacket. Signs of the times include the tree turning yellow, the car with its winter tires already on, and the election sign still up on our front lawn. 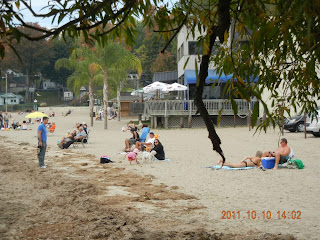 These are the palm trees at Port Dover that need to be replanted every spring. I sometimes screw up pictures not realizing there is some background thing like a telephone pole ruining the picture. This time there was a dead branch in the foreground hanging down. But I decided to keep it in there because it looks like the tentacle of some space monster coming to get the girl who is sunbathing on the beach. There is an appropriate quote I hear all the time: "When life gives you lemons, you make lemonade". Assuming life also gives you sugar and water. And if life also gives you alcohol, make "Mike's Hard Lemonade", which I am drinking right now after that long hot ride.
Copyright the Lost Motorcyclist