Teach the Controversy: O'Reilly vs. Dawkins 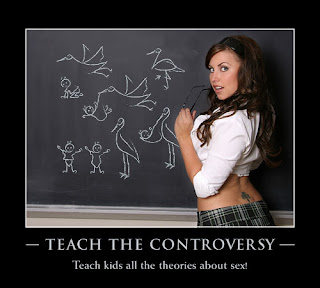 I might have got some of the words of this interview wrong, so you can see it yourself at this link. However, you can see several jump cuts in the video, indicating that some words may have been left out. But Dawkins comes off reasonably well in spite of it, so everybody's happy.

The Interview
Bill: I believe in creative design, I believe in evolution, but I think it was overseen by a higher power, because you guys still haven't figured out how it all began.

Dawkins: There's a great deal science hasn't worked out, and we don't know how it all began, but it's warped logic to say that because science can't answer a question, you're going to throw in your lot with Jesus, and there's no evidence that He did it either, you'll never get any evidence from any of them. Throw in your lot with science, which at least is working on the question.

My Commentary: Dawkins is referring to the earlier interview between them in 2007, Bill said that he was "throwing in his lot with Jesus". Unfortunately, Richard Dawkins is quite naive here in trying to get Bill to throw in his lot with science, because Bill only throws in his lot with making money yelling at people on television. Bill does not care either about Jesus or about where man came from, only what channel they might be watching right now.

What does Bill mean by creative design? It sounds like a mishmash of creationism and science. If he is referring to Intelligent Design, then Dawkins could rebut with the Dover School Board case that ruled ID had no place in the science curriculum.

Bill: Here's the problem I have with throwing in my lot with science: Science does not advance the human condition in any moralistic way, and Jesus did. My thesis is that if everybody followed the teachings of Jesus Christ that we'd have peace on Earth, love your brother, everybody would love one another, and we'd almost be an idyllic civilization. Am I 100% sure that Jesus is God? No, but I'd choose to believe that because the man was so extraordinary and what he did in his 33 years on Earth still resonates to this day. That, I think is more powerful than your belief that "Hey, some day, we might figure it all out but in the mean time we're not going to believe in any deity."

Dawkins: Why would you muddle up the question of moral compass, which is important, with explaining the nature of the world, the nature of life, the universe. That's what science is about.

My Commentary: Where Bill actually muddled things up was by saying the word Science when he actually means Atheism. That is enough to throw Richard completely off, and it does take a bit of time to figure it out, even reading the text. Let alone in a live debate.

Now if Dawkins was to defend Atheism, he would have to come back at Bill that Christianity has not produced an idyllic civilization, and Atheism has come a lot closer, with the concept of "Religious Tolerance". The main example being the USA. I don't know if Bill is doing this muddling of words on purpose or just out of ignorance. But I'll bet a lot of his listeners think atheism and science are two words for the same thing.

Bill: OK I understand that, but I don't think that my belief system contradicts science. I do believe that there is a higher power. But what disturbs me about you guys, and I'm putting you into this category perhaps unjustly, is that you seem to look down on believers.

Dawkins: Well there is a problem when you say that because you believe what you do, because of the holy book and because of the way you've been brought up, therefore that entitles you to go into science classes and tell teachers what they can and cannot teach. You may think that God oversaw evolution, and that's a point of view that you could probably defend, but leave it out of the science class...

Dawkins: It is a remarkable piece of illogic to say that because science can't fill a particular gap, that therefore we have to turn to Christianity...

Bill: You don't have to turn anywhere, you just have to present it!

Dawkins: Will you listen to me and stop shouting at me.

Bill: Turn your earphones down, that's the way I usually talk. Go ahead

Dawkins: I know it is I've been warned about it.

My Comment: Bill got his chance to call Dawkins a fascist, probably the only thing he really wanted to get out of the interview. He also mentioned that there were men smarter than Dawkins who believe in a higher power. I would like to know exactly who they are, Bill O'Reilly for sure is not one of them. And are they smarter because they have a degree from a Bible College? O'Reilly also casually mentioned that there are more believers than non believers. This situation has never held back American science or technology in the past, but is it going to start now?
Copyright the Lost Motorcyclist