Looking at a Propaganda Cartoon 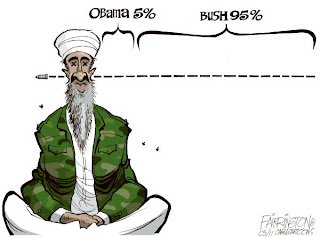 Cartoons have been used throughout history to spread propaganda. They are an excellent propaganda tool because they can be understood in many different languages, they are simple, take little time to absorb, are easily retained in memory. The written words can often be picked apart by astute readers, but many people looking at cartoons may not have the visual skills necessary to see what is wrong with it.

I am presenting an example of a propaganda cartoon here from this website:

Daryl Cagle's website, "The Political Cartoonist Index", has many current political cartoons arranged according to subject. Some are conservative, some liberal left wing. This particular cartoon, by Brian Fairrington, is intended to give the impression that George Bush and the Republicans have done 95% of the work in killing Osama Bin Laden. To many observers, this message will stick easily in their minds far better than the bullet stuck in Osama's.

I have taken the next step, which is questioning the over simplification of this bit of right wing propaganda, and I have put my corrected version below it. Of course, both cartoons are an oversimplification of the actual operation.

From what I can see, most Americans feel that all America deserves the credit for this operation. But if we must say who is especially responsible for getting revenge on Bin Laden, who was it?

I have seen a lot of comments from apparently normal right wingers saying it was the troops who were 100% responsible for killing Bin Laden. These same people claim that Obama was no more than a brain dead puppet whose lips were being manipulated into mouthing "OKEY DOKEY" by his white military handlers. I disagree with their opinion. In fact if they were right, democracy itself would be in big trouble. 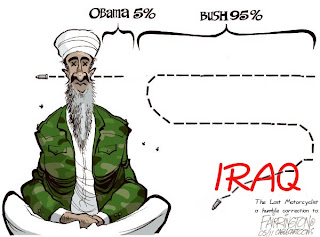 A more realistic view is that many people had a part to play according to their assigned roles. Somebody had to make the helicopters, the guns and the bullets. Somebody had to sift through a million false leads on Bin Laden's whereabouts. Somebody had to decide which lead to follow up on. Somebody had to ride the helicopter with a gun, get off and aim and pull the trigger. Somebody had to drag the body aboard. I don't know who had to do all those things, and some people risked their lives. But there was also the one person who had to give the go-ahead to use American Forces to penetrate the territory of an ally without notification. And that same person will have to deal with the retaliation not only from Al Quaeda, but from Pakistan. Instead of a retaliatory strike, Pakistan could deny America access to the only road bringing supplies to the troops in Afghanistan (That includes Canadian troops too!).

The guy who pulled the trigger risked his life, just as many other people are risking their lives all the time, including civilians (and including Obama in case you forget!).

Obama, (luckily or by design, you decide) has taken a peaceful position that is far more acceptable to the international community than G W Bush's bullying torturing aggressiveness. So it will be far easier for Obama to smooth the ruffled feathers from this intrusion into Pakistan than it would have been for Bush. How about giving credit for that, you war hawks?

Look, it's this simple. Jimmy Carter gave approval to an operation against Iran that failed (remember that?), and he is still getting the blame for it to this day. Obama gave the order, and will deal with the fallout from this operation, not the military. He should get as much
credit for doing it right as the blame he would have taken for an epic failure. Is that fair?

Picture: The second cartoon is my photoshopped "correction" of the first to show the opposite point of view.
Copyright the Lost Motorcyclist