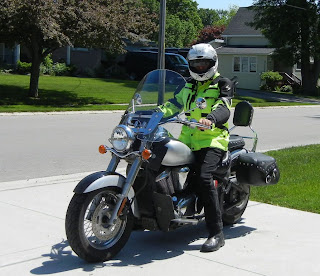 On Sunday I started from Dutton by motorcycle at 3 PM, stopped at Port Stanley then Port Bruce, and headed home through Aylmer and the 401.

In rainy weather I rarely think of cleaning my windshield, but with sunshine, bug spatters become unsightly. I remember reading an old tip about leaving a wet towel on the windshield to soak the bugs guts off, but it has never worked for me. Also, scratching the guts off with fingernails can leave scratches on the windshield. Here is a free tip from "The Lost Motorcyclist Blog": (I cannot guarantee that it will work for all types of windshields, and all kinds of brushes) I used my Mother's kitchen dish scrubbing brush to clean off the Vulcan's windshield, using a lot of scrubbing and soap and water. Finally, with the windshield almost perfectly clean, and yet not scratched by the brush, I waxed it with Armor All car wax. You may reduce the risk of scratches by trying it on a small patch lower down on the windshield first.

I started riding with a clean windshield, the temperature about 25c and in sunshine. Port Stanley was crowded with cars on the roads and people on the beach, and parking was tight close to the beach. Near the turning circle beside Lackey's, I couldn't find a free parking spot, then ended up in some loose sand that nearly could have dumped the bike. Once the bike was safely parked in the big free parking area, 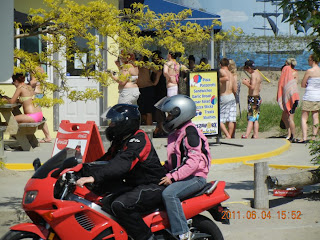 I walked around taking pictures, and looking at bikes and cars. One low rider car was scraping the bottom over any bumps in the road. When I finished taking in the sights, I fought my way to Dexter Line through all the traffic.

Dexter Line is the road to Port Bruce, and with little traffic I was having a good time zipping along. But just before getting to Port Bruce, I passed a car, then as I was beginning to think about slowing down to my normal cruising speed, I spotted a police car parked in the middle of the curve on the road with its lights on. Despite my unclear conscience, I turned onto Martyn Line just before the police car. Martyn line is narrow, and unpaved, and has several ninety degree corners for no apparent reason. This new route includes some hills and curves, and comes out on Rush Creek road, which is mostly paved, with an iron single lane bridge. Rush Creek Road comes out on the opposite side of the bridge from Dexter Line in Port Bruce, and so I got my bearings again. One of these days I have got to get a GPS, even if I just use it for all the detours and blocked roads due to accidents and construction!

Port Bruce had a completely different atmosphere from Port Stanley. I often see Mennonites bringing their children to the play area near the beach. Most of the people on the beach were fishing, not sunbathing or playing beach volleyball or swimming. Near the lake, the beach is made of pebbles, not sand. There are several cafe's and ice cream places, with outdoor patios (or indoor service) to sit and have something to eat or drink. There are two public toilets, but the one I went to, which is usually clean, was all plugged up and fairly gross that day.

I had just killed 2 hours, and it was already 5 PM by the time I left Port Bruce. Usually it takes me about 90 minutes to go from Dutton to Kitchener. I decided to head up through Aylmer to the 401 and home. My next stop was at the Ingersoll exit on Culloden Road, where there is a Petro Canada, a Tim Horton's and an A&W drive through. I decided to go to the A&W just for old times sake. Some things have changed. It's now a "Drive Thru" not a "Drive In". In the old days, you were expected to eat while parked, and waitresses brought you a tray that they hung on your roll-down window. Today you speak to a microphone, your food is tossed in through the window, and you screech off, munching on your papa burger as you avoid pedestrains and other cars while driving with your knee and using a cell phone to tell your wife you'll be home soon (or never, depending on your luck).

While the "Drive In" is now a thing of the past, I did hear some oldies playing on the PA when I took off my helmet. The first guy to come out of the restaurant section looked like he could have starred in "Grease". And when I asked for root beer, they served it in a big frosty mug. Wow! Seemed almost like old times. I also notice the menu has now expanded to Grandma and Grandpa items, while in the old days it only went from Teen burgers to Papa burgers.

First picture: Me leaving Dutton with clean windshield
Second: Port Stanley Sunday crowd. Sailing ship in background is on a mural.
Both pictures taken with new camera, not sure if the red motorcycle colour is exactly right.
Copyright the Lost Motorcyclist