Sunday the Fifteenth I am Still Not Near Port Dover 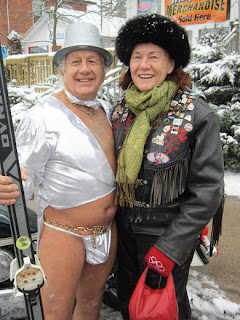 I missed going to Port Dover for Friday 13th, and I'll admit it was just because of the weather.  Up to Thursday the 12th, we had nice conditions for riding, but there was a snowstorm that night which left the roads slippery.  But I was impressed at the turnout according to these websites:

So I stayed home Friday.  But today was a regular Sunday Tim Hortons board meeting, and a combination of circumstances got me out of the house and riding.  The temperature warning was dire, with a low of -17c  and a high of only -8c.  On the other hand, I didn't have the car today,  the roads were bare and dry, and it's too far to walk. Given that I was also a bit annoyed at missing Friday 13th, once again I needed the motorcycle.

I chose the Burgman 400, as I find it very easy to ride with heavy mitts and big boots.  I fixed the glove compartment last time, so there should be no problem today.  I never know how early to start getting ready, as it is a half hour drive, plus the amount of time it takes me to get myself and the scooter ready to ride.  To be on the safe side, I started preparing ninety minutes early.  First I went to the garage to roll out the scooter and let it warm up. It took one very long crank, then coughed to life briefly and died. A second crank got it running steadily.  I left it to warm up while I went inside to collect all my gear.

The getup today was fairly simple, as I was only riding for half an hour before I would be warming up with a coffee and muffin.  I wore the electric vest just in case, but never needed it.  However at -10c, I always need something warm for the hands.  I have a few choices, but one effective solution (if the temperature is freezing) is heavy duty leather mitts with a pull-out thermal liner. It has to get really cold for a very long time before my hands go numb.  Next I used my Scorpion high visibility jacket, with both liners and the neck protector zipped up.  With long johns, a sweater, and leather overalls I was comfortable enough even without plugging in the electric vest.

I have one more invention for the cold, it is a snorkel to breathe out of.  I described this simple device about a month ago, but had never tested it in really cold weather.  Today there were no steamed up glasses or visor.

So when I arrived a Timmy's all I had to do was take off my jacket, the helmet, and mitts, and go inside the coffee shop.  There is some cold extremely effective gear that is no good for sitting in restaurants,  one piece snowmobile suits, for example.

I was a little surprised that three different people on three different occasions at Timmy's spoke to me about riding the bike in the cold.  Usually nobody says anything - but - it could be that because I was sitting alone for 45 minutes (I obviously got started way too early), or that I brought my helmet inside to keep it warm, or because Friday 13th was all over the radio, TV and newspapers.  In any case, the cashier said I was very brave to go riding.  The couple at the next table said "Cold enough for ya?" and we spoke about riding in the cold.  Then a man came in with his wife and approached me to ask me about the scooter and tell me about a wonderful day of he spent riding a Vespa 125 with his wife on a Caribbean island with mountainous roads.

Tim's is in the middle of a huge cultural changeover right now, which may scar many tender Canadians  psyches.  They are eliminating the small coffee, renaming the medium to small, large to medium, extra large to large, and they have found a paper bailing bucket that will now be referred to as an "extra large".  They also now sell a lasagna-like meal that I really like.  So it was very pleasant warming up with some hot stuff in hand before the actual meeting started.

BY three PM, the sun was threatening to go down, so I figured it was time to leave, as I do not like driving with temperatures falling and the shadows getting longer.

Photo: Friday 13 Port Dover from the Toronto Sun, I was shocked that I know one of the people in this picture.  No, thank God, it is not the nude guy. http://www.torontosun.com/2012/01/13/snow-fails-to-deter-friday-the-13th-revellers
Copyright the Lost Motorcyclist