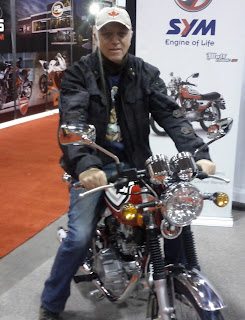 The Toronto Motorcycle Show is on now, located in the Metro Convention Centre.  I went down on Friday with three other back country rubes to see the show and see a bit of the big city. Our idea of big city sightseeing is to complain about traffic on the 401, walk through the mall renouncing the high price of watches, and other luxury items. Then we take the first compartment of the subway train, where we can give the driver directions if necessary.  We grab some Tim Hortons coffee and pig out on Cinnabons (Yes I know we have those in Kitchener too, but our wives and doctors are not in Toronto), and then make our way to the show through the Skywalk.  But On Friday, we were thrown a curve ball when the ticket booth lady informed us "Of course you know the show does not open until 12:00 today?", "No, I did not know that, which is why all us retired people woke up at 7:00 AM to get here exactly at 10:00 AM, when the show always is supposed to open."

The delay had us stumped for a few minutes, but then we decided to go outside and see what the rest of Toronto looks like.  Also the weather was not ridiculously cold, which is quite rare for this time of year. Never having gone outside to look around before, we were quite surprised to find a bar across the street, that serves free beer.  It turns out this is the Steamwhistle Brewery, which gives brewery tours and gives out free samples of their product.  Funny thing is the tour costs $10, but the beer is free and you don't even need to go on the tour.  However you are limited to one small glass and you do have to return the glass before you leave.  The brewery is built in "The Roundhouse", an old railway maintenance yard, with a turntable in the middle.  There are some old locomotives and rolling stock around too, and a railway museum, which was closed at the time. 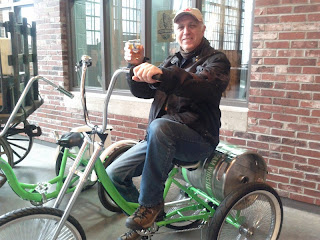 We killed about half an hour in the brewery bar, then continued walking around the block back to the Convention Centre.  We briefly considered going up the CN tower, right next door, but we had all been up there before when the price of the elevator was under $10, and now it's about $25-35.  Apparently they provide some more experiences to add value to the tour, but we were really only killing time until the show, so we skipped the CN Tower and made our way back the the show.

Finally, I was loose in the motorcycle show I located the Sym booth, where the Sym Classic 150 was on display. I like the retro styling, and if my garage was not already filled with four motorcycles, I might buy this one.  I was told they would be available in March 2013 (if I heard correctly- and all of this is based on me hearing correctly) and priced at $3100, which is almost the same as the US price.  I wish Suzuki would sell their TU250 in Canada for the US price, it's actually a lot more expensive here.  The Sym distributors are still looking for dealers, but will also sell direct to a customer and deliver the bike to your house.

The 2013 Sym 150 has several improvements on my 1970 Honda CD175. It has electronic ignition, 12 volt battery and halogen headlight, of course modern electric regulators/rectifiers etc., tachometer, trip meter, better gas mileage, an 18" front tire, 5 gears (instead of four) and front hydraulic disk brake.  But is is not as good in other ways, as the Honda has a fully enclosed chain drive, two cylinders (not one) and adjustable handlebars (instead of clip on type).

There are also several apparent differences that I couldn't say are bad or good, the Sym has a washable foam air filter, no on/off light switch,  and an automatic fuel tap.  The single cylinder engine is a bit smaller, but likely just as fast on the road.

Kawasaki wasn't there again this year, and this time we also missed the Amsoil girls, even though I don't use the lubricants.

Touratech, the European touring accessory company, was present giving out a free catalog, which I put in my bag even though it was heavy.  But then I found out that 80% of it is for parts dedicated to specific motorcycles.  Touratech sells products suitable for motorcycle touring such as GPS's, tents, sleeping bags, flashlights, knives, tire pumps, clothing etc. The company was founded by Herbert Schwarz, a veteran touring rider.  On page 1302 of the catalog (I said it was big!)  is an explanation of Herbert's dissatisfaction with current trends where motorcycle jackets have waterproof liners. Hey, I also dislike that!  As I understand it, the Touratech motorcycling suit starts with a summer suit you can wear in warm dry weather.  There is a second, waterproof oversuit (jacket and pants) that is designed to  zip on over the summer suit.  I looked up the price later, looks like we are in the thousand dollar plus range.

I have also been looking at the new "Adventure Touring Helmets", basically like a full face helmet with a bigger eye port, and bigger visor to cover it, and an external sun shade or peak.  Technology changes, and I like to see the new stuff at these shows.

Picture: Me on the Sym Classic 150 looking good.  Second pic, me with beer on a Steamwhistle Brewery delivery tricycle, feeling good.
Copyright the Lost Motorcyclist