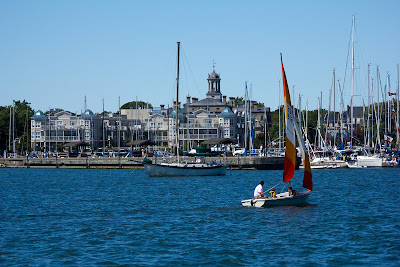 Yesterday Mary Ann and I visited Cobourg Ontario. Cobourg is a small town on Lake Ontario.  It has a spectacular old town hall, and a historic district with several buildings that look like they were put up in the 1800's.  It is also on the beach, and even has a campground right on the beach. With all the outdoor cafes, it is my favourite kind of town to visit.  We both went on my Kawasaki Vulcan 900.

In theory, we live only two hours away from Cobourg, but we had never been there before.  That's because Cobourg is on the other (east) side of Toronto.  There is no easy way to get through Toronto, so if I want to just go for a drive and visit some random town, it will be one that is west of Toronto.  After living in Kitchener for 33 years, I know south western Ontario quite well, but south eastern Ontario is unexplored territory. The only way to cross Toronto is either the 401 or the 407. The 401 is up to 12 lanes of insane drivers stuck in senseless traffic jams that go on for miles.  The 407 is a less frantic alternative, but it is toll road, and oddly ends nowhere.

We chose to visit Cobourg because we went to see some people who live there. We also got to see a beach volleyball tournament, and the annual Great Pine Ridge classic car show.  I was amazed by the number of restored cars I had not seen before.  Our hosts had an old Commer camper van entered in the show.  Here is a link to the show, and an entry on Wikipedia for Commer in case you have never heard of this old British manufacturer.

I didn't have my camera, but there are a lot of great pictures of Cobourg here
http://forum.skyscraperpage.com/showthread.php?t=205642

The weather forecast for the entire day was 50% chance of precipitation, in isolated thunderstorms.  So I brought along my good luck charm against thunderstorms, the smartphone with weather radar on it.  Despite all the wet weather we have had this year, so far I have not driven into a heavy rain storm.  The drive to Cobourg in the morning had no traffic jams, and no rain.  Apparently about half the vintage cars skipped the show because of the threat of rain.  It didn't matter to me, as approximately one hundred cars did show up.  With Mary Ann, who can take or leave old cars, (mostly leave actually), and other things to do like beach volleyball, visiting the marina, and reading historical plaques in downtown Cobourg, the extra cars were not missed.

We left at 8 PM for the ride back to Kitchener.  There were three problems.  It was getting dark, there were isolated rain storms around, and the traffic would be much worse.  In Toronto, we got stuck in a half hour long traffic jam when some rain started.  But we still were reasonably dry, even without putting on our rain outfits.  I guess with the windshield, the clothes I was wearing were kind of water resistant.  When we finally got out of Toronto, I wanted to stop and check the weather radar, but I missed our first opportunity, which is Milton. The next place to check the radar would be Morriston, but before Morriston my luck ran out and went through the middle of a heavy rainstorm.  It is bad to get a lot of rain at night, on a freeway, riding a motorcycle, without proper rain gear on. We were doing all those things. By the time we reached Morriston my boots were filled with water and I was leaving a trail of wet footprints wherever I walked.  The rest of me wasn't too wet, even though I forgot to close the vents on my jacket.  It was cold in Tim Hortons, but warm enough outside on the road.  When I finally checked the radar, the rain had passed, so I zipped up my vents, put on the wet gloves, and was home by midnight.  The gear is still drying out.

It will probably be quite a while before we visit the unknown side of Ontario again. South Eastern Ontario is a great place to go motorcycling, probably a great place to live, but Toronto remains a formidable barrier for us western people.

Picture: A CL16 sailing in front of Cobourg marina.  I saw lots of CL16s at the sailing club. I got the picture here:
http://lucparent.wordpress.com/page/2/